They Crawled from Uranus 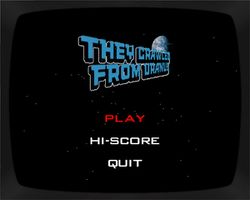 The menu of They Crawled from Uranus in GTA San Andreas.

They Crawled from Uranus is a minigame in Grand Theft Auto: San Andreas, available in the form of one of the game's four arcade games. They Crawled from Uranus arcade machines are scattered throughout interiors of buildings San Andreas, including bars, nightclubs, 24/7's and Madd Dogg's Crib. The game is also available in home console form, such as on the CJD 500 in the Johnson House.

They Crawled from Uranus is similar in gameplay to Tempest, in which the player is only able to move around a central space and shoot towards the center. The player assumes the role of a space pilot aimed at destroying advancing and retreating alien crafts that fire at the player from the center of the screen. By destroying every strand of enemy ships, a warp token will appear for the player to pick up; thought not necessary, attaining three such tokens will send the ship "warping" to the next level, where enemy ships move in more unpredictable paths and fire at the player more frequently; players will also score higher individual points at higher levels.

Retrieved from ‘https://www.grandtheftwiki.com/index.php?title=They_Crawled_from_Uranus&oldid=373213’
Categories:
Cookies help us deliver our services. By using our services, you agree to our use of cookies.