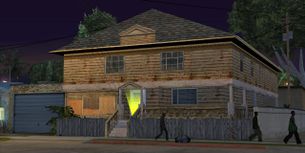 The Johnson House, the home of Carl Johnson and other Johnson family members, as depicted in Grand Theft Auto: San Andreas. 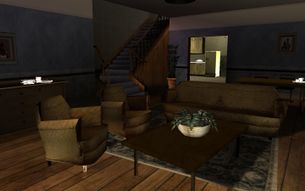 An interior shot of the ground floor.

The house was the target of a drive-by shooting in early 1992, which cost Beverly her life (although the Ballas gang members were aiming for Sweet Johnson). Carl, who had returned from Liberty City, moves into the house after hearing the news of his mother's death.

After the mission The Green Sabre, The Johnson House becomes unoccupied while Carl is in the Badlands and Sweet is in prison, Grove Street and the house will then lie within Ballas gang territory. Although the house is not vandalized, a druggie does steal the family blender out of the kitchen. The home falls back into the hands of Carl and Sweet after they return to Los Santos. The house is the place of the last cut scene of Grand Theft Auto: San Andreas, where Carl and friends share old memories together.

The Johnson house is much larger than many other homes in Ganton, and unlike most houses in the district, the house is two story. It has many modern essentials including a television, rug, couches, and a game console on which you can play They Crawled from Uranus. A Wardrobe is also available upstairs, across from the bedroom. There is a garage located next to the house that can store up to two vehicles, but players are warned that they can disappear from this garage.

The Johnson House becomes an asset after the completion of the mission Doberman, where the Dollar icon will spawn outside the garage. After the events of pre-exile mission The Green Sabre, the House loses its asset status, although this is restored after completing the final exile chapter mission Home Coming. The maximum amount of money The Johnson House asset will make is $10,000.

Grove Street Families
Retrieved from ‘https://www.grandtheftwiki.com/index.php?title=Johnson_House&oldid=418389’
Categories:
Cookies help us deliver our services. By using our services, you agree to our use of cookies.