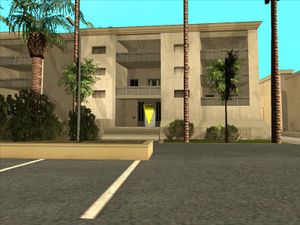 The Verona Beach Safehouse is a safehouse in Verona Beach, Los Santos in Grand Theft Auto: San Andreas. Carl Johnson, the player character, can purchase the safehouse for $10,000. The safehouse does not have a garage and no vehicles can be stored there. The Burger Shot in Marina, where OG Loc briefly works, is located nearby.

The safehouse can be used to save in-game progress while playing OG Loc's missions. Later on, in the game, it can also be used to save the game while attacking the Ballas-acquired Families territories in the return leg segment. Other than these, it does not serve much purpose in-game, except for 100% completion of the game.

Retrieved from ‘https://www.grandtheftwiki.com/index.php?title=Verona_Beach_Safehouse&oldid=418387’
Categories:
Cookies help us deliver our services. By using our services, you agree to our use of cookies.