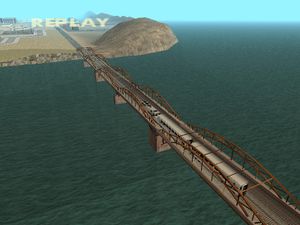 The "Replay" feature in use in Grand Theft Auto: San Andreas.

A replay, or instant replay, is a minor feature that allows the player to review the last minute of gameplay. Predominantly exclusive to PC version of Grand Theft Auto games, replays are simply reconstructed using certain available data from the latest round of gameplay, such as player actions, coordinates of surrounding vehicles and pedestrians, time, and weather. As a result, the replays are not necessarily accurate recreations of actual scenes, and were considerably crude when first introduced.

The replay system employed by GTA III, GTA Vice City and GTA San Andreas basically reproduces the latest moments of gameplay that range from a minute to twenty seconds long. The length of a replay depends on the density of traffic and pedestrians; as more cars and pedestrians are recorded, the replay becomes shorter.

Replays are activated by tapping the F1 key on the keyboard anytime during gameplay, showing a rough recreation of the surrounding where the player character is, and is played without the HUD other than the flashing "Replay" text. The player can leave the replay by pressing F1 again, or wait until the replay ends on its own. By default, viewpoints employed during a replay is based on where the player was looking at that moment, including where the player was viewing on foot or in a vehicle, and first person view if the player is free aiming using a rifle, rocket launcher, or sniper rifle. Moving the mouse in a replay allows the player to move around the player and view the player character's surroundings. Replays can be saved by pressing the F2 key and saved replays can be viewed by pressing the F3 key. Only one replay can be saved at a time.

Replays between GTA III and GTA San Andreas are often plagued with crudeness due to insufficient data, with unusual pedestrian behaviors, choppy and distorted player movement, missing or reverted objects (such as corpses, and vehicle modifications in GTA San Andreas) and cycling accessories on vehicles. Minor refinements were made to improve the presentation of replays and to reduce its buggy animation, although the general quality of these replays remain average to mediocre.

For the PC port of GTA IV, the replay system is managed very differently and is a vast improvement over its predecessors. In the game, the player is offered a specialized replay editing software called the Video Editor, which allows the player to edit, direct and upload replays saved during gameplay.

During gameplay, the player may press the F2 key to create a recording of recent activities in game. Like its earlier predecessors, the length of saved replays depends on the amount of activity in recorded locations, resulting in replay lengths that range from 20 seconds to more than a minute. A recorded replay is saved in My Documents\Rockstar Games\GTA IV\Videos\Clips, and its file is usually around 100 megabyte large.

Although replay recordings in GTA IV are far more accurate, unusual side-effects are still numerous. Vehicle lights do not appear to break from damage, and vehicle damage may experience bizarre distortions. Weather can change abruptly (due to a lack of smooth transition between different weather conditions), and particles and other visual effects may also appear incorrectly or do not appear at all.