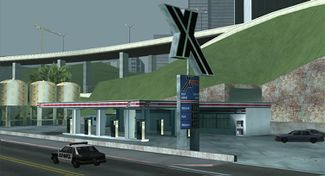 Xoomer is a gasoline retailer in Grand Theft Auto: San Andreas, with numerous tankers and gas stations throughout San Andreas. Its retail locations are distinguishable by the large "X" rotating above the pumps. Carl Johnson's garage in Doherty, San Fierro is a run-down, antiquated version of a Xoomer gas station/garage, with a faded sign reading the full name of "Xoomer" visible on the canopy above the defunct pumps, and no visible remnants of a rotating "X". However, after several mission completions, it has become a successful chop shop garage, also serving as a safehouse, with a garage big enough for three vehicles. Xoomer is most likely a parody of Exxon, as the "X" in "Xoomer" is similar to the double "X" in Exxon's logo.

In Grand Theft Auto IV, large gas tanks have the words "Xoomer" on them, most notably found in Port Tudor.

Xoomer is the owner of the truck Carl and Cesar Vialpando steal during the Mike Toreno mission Highjack. In both missions, the company's logo, a large "X" with the name "Xoomer" superimposed, is seen emblazoned on the sides and back of the truck's tank. Furthermore, the trucking missions just outside western Los Santos sometimes require the player to drive a tanker. Invariably, the tanker sports the Xoomer logo on its tank.

Retrieved from ‘https://www.grandtheftwiki.com/index.php?title=Xoomer&oldid=418458’
Category:
Cookies help us deliver our services. By using our services, you agree to our use of cookies.