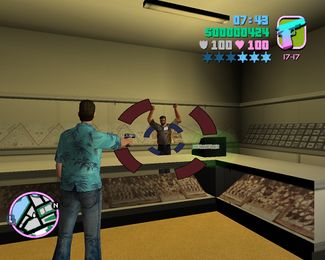 Auto-aiming at a jewelry show attendant as he drops money on the counter in GTA Vice City.

Store robberies were first implemented in GTA Vice City as a side activity that can be executed at any point of the game by entering specific stores in Vice City, and threatening their store attendants at gunpoint, by either aiming them with the aid of an auto-aim in the PC version with "Classic Control" or the console versions, or by pointing the crosshair at the attendant while using "Standard Control" in the PC version.

The longer the player aims their weapon at the store attendant, the more money is dropped on the counter for the player to pick up. However, for each drop, the player's wanted level is raised by one star, capping at a 3-star level; the amount of money the player may receive ranges from a low of less than $100 to a maximum of several thousand dollars, rewarding the player increasingly at the expense of being confronted by more aggressive law enforcement.

Robberies can only be performed at stores where store attendants donning brown uniforms are on duty; as such, attendants at restaurants like Well Stacked Pizza and North Point Mall food court outlets and Ammu-Nation stores will not give the player anything in stick-ups. There are a total of 15 stores that can be robbed all over the city, and the act of robbing all 15 outlets (of any amount of money) is a requirement for attaining 100% completion. The stores' names, if available, and locations are as follows:

In GTA Vice City Stories, the game's rendition of Vice City introduces a myriad of new businesses with interiors that can be entered and robbed. However, the mechanics of store robberies is modified, and as a result no longer requires the player aim their weapon at the store attendant. Instead, the player may simply kill the attendant, or force the attendant to hand over their cash onto the counter by destroying anything of value within the store (i.e. supermarket refrigerators, clothing racks, or electronics items) using any weapon. The returns from basic store robberies are often very low (at least $100), and store attendants may refuse to pay up even if the player destroys store property (which may prompt the player to simply kill the attendant anyway for money).

Businesses that can be robbed in the game include the following:

While stores at the Vice Point Mall feature interiors and store attendants, none of them can be robbed in a similar manner.

The player having just robbed $22 from a laundromat's cash register in GTA IV.

Store robbery in GTA IV is significantly simplified. Players no longer require to threaten or kill a storeowner, but simply walk up to their counter's cash register and open the tray to obtain their cash; as a repercussion, the player may either receive a one-star wanted level 10 seconds after the robbery, or an instant one-star wanted level in the case of Modo as the store has an alarm that immediately goes off the moment the player steals from the cash register. Often times, the amount stolen may only range from a high of a couple hundred dollars to a low of nothing at all, making the business of robbing stores far less lucrative.

Stores that can be robbed in GTA IV include: