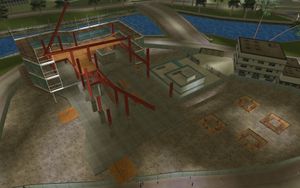 Avery's Construction Site refers to a construction site in Grand Theft Auto: Vice City. It is located in southern Vice Point, at the border with Washington Beach, and is a short walk away from Bunch of Tools and the Spand Express depot. The construction site serves as the starting point for Avery Carrington's string of missions.

In Grand Theft Auto: Vice City Stories, set in 1984, the site that the construction site currently occupies was used as a fairground, in which the Chunder Wheel was located. By 1986, the area is used for construction by Avery Carrington. It is unknown exactly what happened to the Ferris Wheel and the fairground, though it is implied that Avery Carrington bought the fairground and demolished it in the time gap between 1984 and 1986 to build either an office building or condominium. However, as of 1986, construction is still ongoing, and what is supposed to be built remains a mystery. A Hidden package can be found on one of the beams facing Starfish Island. A Pistol spawns at the base of the construction site. The Construction Site is also a good place to lie low on a one star wanted level, and to engage law enforcement on high wanted levels.

Avery's Construction Site is used as the starting point for Avery Carrington's missions. Avery's Black Stretch is found in the construction site, but it only appears in cutscenes, and it is unobtainable to the player.

This article is a Stub. You can help Grand Theft Wiki by expanding it.
Retrieved from ‘http://www.grandtheftwiki.com/index.php?title=Avery%27s_Construction_Site&oldid=350954’
Categories: