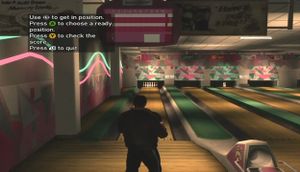 Bowling is a game that can be played alone or against a friend or girlfriend in Grand Theft Auto IV. It can be played at two bowling alleys owned by Memory Lanes. Bowling is introduced to the player during the mission First Date but the player can bowl anytime while not on a mission before that. The player gets a choice of playing a half game or a full game. A win in bowling is required for completion. The achievement Gobble Gobble is given if the player scores a "turkey" (three strikes in a row). Non playable characters can be seen bowling in the bowling alleys. The player can still bowl in The Lost and the Damned and The Ballad of Gay Tony, but it is no longer available as a friend activity, seemingly replaced by Air Hockey.

The player (either playing with a buddy or alone) must roll the bowling ball to the end of the lane to knock down as many pins as possible. Before doing so, the player must mark his starting position for the best trajectory. Once the ball is released, the placement may be adjusted until the bowling ball passes the red markings on the center of the lane. After that, it's just luck. All of the instructions for the buttons are displayed on the top of the screen.