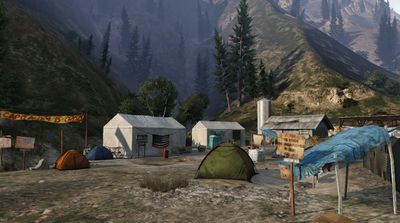 Dignity Village is a small unincorporated commune located off the Senora Freeway in northern Blaine County, San Andreas, which appears in Grand Theft Auto V and Grand Theft Auto Online. The residents of the commune include the poor, the homeless and anti-capitalists such as Curtis Weaver. The residents of Dignity Village dislike Franklin Clinton, Michael De Santa and Trevor Philips, attacking them if provoked or the protagonist stands close to them for a period of time although they will run away when a gun is drawn. The village features a few small buildings and a number of tents.

In GTA Online, the Commune death match and a gang attack take place in Dignity Village. The gang attack can feature the Wei Cheng Triad, the Armenian Mafia or The Professionals. In GTA V, Trevor Philips locates bail jumper Curtis Weaver at Dignity Village while working for Maude Eccles, with the player having the choice to apprehend or kill Weaver.

Retrieved from ‘https://www.grandtheftwiki.com/index.php?title=Dignity_Village&oldid=415938’
Categories:
Cookies help us deliver our services. By using our services, you agree to our use of cookies.