The golfing minigame in Grand Theft Auto: Vice City Stories, during "Home's on the Range".

The first depictions of golf in the GTA series appears in the form of golf courses in part of a city. They include:

With the exception of the Golden Pier Swingers Golf Course (which is merely a driving range), these golf courses tend be depicted with open lawn areas, sand traps, water hazards, putting greens (complete with flag poles pinpointing golf holes) and the country club building itself; (non-interactive) tennis courts are also present within the Leaf Links and Avispa Country Club. It is also common for the player to spot golfer pedestrians and Caddy golf carts in and around the courses.

The first trailer for Grand Theft Auto V depicts at least one golf course, the "Los Santos Golf Club" (seemingly based on the Los Angeles Country Club), as well as golfing pedestrians and a Caddy golf cart. According to Dan Houser in the December issue of Game Informer, there will be a full golf course to play in.

Golf as a minigame 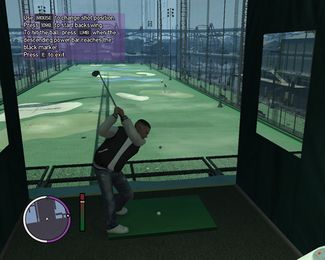 Teeing off during a round of golf in The Ballad of Gay Tony.

Golfing as an in-game activity is not available in GTA Vice City and GTA San Andreas. In GTA Vice City Stories and The Ballad of Gay Tony, however, the player is given the opportunity to tee off at driving ranges in Leaf Links or the Swingers Golf Course.

The game mechanics of the minigame in both games are similar in that the player is required to time their swings as accurately as possible by plotting an oscillating cursor on a "power" bar as close as possible to a designated point, thereby resulting in a more accurate shot. In the Ballad of Gay Tony, the shooting mechanics is slightly improved to allow the player to point at the spot where they want the ball to land, while increasing the challenge of gameplay; the further the target which the ball must go, the higher the point which the cursor must be plotted at is.

In GTA Vice City Stories, golfing is first introduced during "Home's on the Range", which also unlocks the Swinger's Club golfing side mission. Golfing in The Ballad of Gay Tony is available after completing "Practice Swing", after which it can be activated by accessing the front entrance of the Golden Pier's Swingers Golf Course; players can choose to play with an anonymous competitor, or play with any of Luis Lopez's friends.

Retrieved from ‘https://www.grandtheftwiki.com/index.php?title=Golf&oldid=408334’
Categories:
Cookies help us deliver our services. By using our services, you agree to our use of cookies.