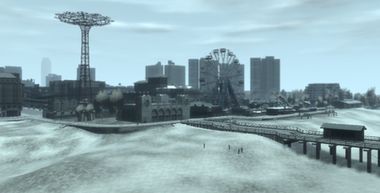 The Firefly Island district composes of the namesake amusement park and a massive beach and pier adjoining the fairground.

Firefly Island is an amusement park in southern Broker, featuring several rides such as the Screamer. It is bordered to the north by Crockett Avenue (Hove Beach), to the west by the Humboldt River, to the south by an unnamed body of water, and to the east by Shinnecock Avenue (Beachgate).

Despite being called an island, it is actually physically connected to the Broker mainland. The park is closed for the season during the game. Banners hung in the area also imply the area is closed for the season, and Michelle commented during her first date with Niko Bellic that there was interest in developing the site, or turning it into a "Las Venturas-style theme park". Local businesses, however, such as a bowling alley and hot dog stands, still operate.

Liberty City's Firefly Island is the equivalent to New York's Coney Island. At least four rides in the park draw inspiration from real life Coney Park rides. Coney Park's Wonder Wheel Ferris wheel is recreated as the Liberty Eye, Dante's Inferno appears as the Corpse Ride, The Cyclone roller coaster serves as the basis of the Screamer, and an unnamed tower based on the Parachute Jump is located to the western edge of the fairground.

In the amusement park, located quite near the miniature golf course, there is a fairground ride with a backdrop made up of three screenshots from Grand Theft Auto: San Andreas: the Vinewood Sign, a Hydra hovering in front of the Los Santos skyline, and a Shamal flying over the countryside. The similarity of this mural and the end of the Grand Theft Auto V trailer (where a private jet flies over the Vinewood Sign and towards Los Santos) has lead many to believe that the mural was a deliberate hint towards the location of GTA V, which would suggest that Rockstar North had planned the production of GTA V before releasing GTA IV.

Being a beachside amusement park, the entire area of Firefly Island can be considered a place of interest; however, specific attractions located within its boundaries include the Funland amusement park off Oneida Avenue, the Memory Lanes bowling alley along the boardwalk. The boardwalk is identified the "Alexander Boardwalk" from signs along the boardwalk, roughly stretching from Mohawk Avenue to Shinnecock Avenue.

Subway service is provided at the station in neighboring Hove Beach, to the north. If the player unlocked Brucie Kibbutz's special ability, Firefly Island is one of the destinations available.

Retrieved from ‘https://www.grandtheftwiki.com/index.php?title=Firefly_Island&oldid=376622’
Category:
Cookies help us deliver our services. By using our services, you agree to our use of cookies.