Wikipedia has an article on:
Jack Thompson 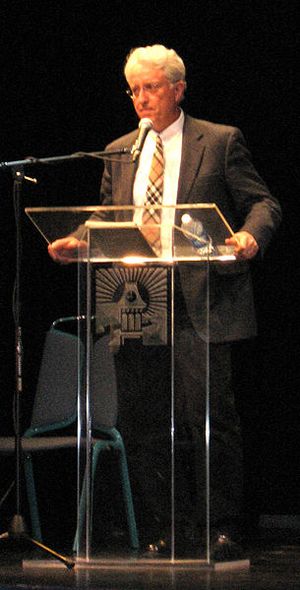 John Bruce "Jack" Thompson (born July 25, 1951) is a former American attorney and campaigner against obscenity and violence in the media. He currently resides in Coral Gables, Florida. He was permanently disbarred (license to practice law revoked) for misconduct [1]. Thompson has campaigned against rap music, radio presenter Howard Stern and video games including the Grand Theft Auto series, Bully and Mortal Kombat: Deadly Alliance.

More recently, Thompson has heavily criticized a number of video games and campaigned against their producers and distributors. His basic argument is that violent video games have repeatedly been used by teenagers as “murder simulators” to rehearse violent plans. He has pointed to alleged connections between such games and a number of school massacres. He claims that scientific studies show teenagers process the game environment differently from adults, leading to increased violence and copycat behavior.[2]

Thompson has rejected arguments that such video games are protected by freedom of expression, saying, “Murder simulators are not constitutionally protected speech. They’re not even speech. They’re dangerous physical appliances that teach a kid how to kill efficiently and to love it.” In addition, he has attributed part of the impetus for violent games to the military, saying that it was looking “for a way to disconnect in the soldier’s mind the physical act of pulling the trigger from the awful reality that a life may end.”[3] Thompson further claims that some of these games are based on military training and simulation technologies, such as those being developed at the Institute for Creative Technologies, which, he suggests, were created by the United States Department of Defense to help overcome soldiers’ inhibition to kill.[4] He also claims that the PlayStation 2's DualShock controller "gives you a pleasurable buzz back into your hands with each kill. This is operant conditioning, behavior modification right out of B.F. Skinner's laboratory."[5]

Thompson filed a lawsuit on behalf of the parents of three children killed in the Heath High School shooting in 1997. Investigations showed that the perpetrator, 14-year-old Michael Carneal, had regularly played various computer games (including Doom, Quake, Castle Wolfenstein, Redneck Rampage, Nightmare Creatures, Mechwarrior, Resident Evil, and Final Fantasy) and accessed some pornographic websites. Carneal had also owned a videotape of The Basketball Diaries, which includes a high school student dreaming about killing his teacher and some classmates. The suit sought $33 million in damages, alleging that the producers of the games, the movie, and the operators of the internet sites were negligent in distributing this material to a minor because it would desensitize him and make him more prone to violence.

The suit was filed in federal district court and was dismissed for failing to present a legally recognizable claim. The court concluded that Carneal’s actions were not reasonably foreseeable by the defendants and that in any case, his actions superseded those of the defendants, so that the latter could not be the proximate cause of the harm. In addition, the judge determined that “thoughts, ideas and images” in the defendants’ materials did not constitute “products” that could be considered defective. The ruling was upheld on appeal.[6]

In February 2003, Thompson asked permission to file an amicus curiae (or “friend of the court”) brief in the Ohio case of Dustin Lynch, 16, who was charged with aggravated murder in the slaying of JoLynn Mishne; Lynch was "obsessed" with Grand Theft Auto III.[7] In a motion sent to the prosecutor, the boy’s court-appointed lawyer, and to reporters, Thompson asked to be recognized as the boy’s lawyer in the case. However, Medina County Prosecutor Dean Holman said Thompson would be faced with deeply conflicting interests if he were to represent Dustin Lynch because he also advised Mishne’s parents.[8] Claiming that delays had weakened his case, Jack Thompson asked Medina County Common Pleas Judge Christopher Collier to disqualify himself from presiding over the case because the judge had not ruled on Thompson’s request for two months.[9] Lynch himself eventually rejected Thompson’s offer, withdrawing his insanity plea.

Thompson returned to file a lawsuit in Tennessee state court in October 2003 on behalf of the victims of two teenage stepbrothers who had pled guilty to reckless homicide, endangerment, and assault.[10] Since the boys told investigators they were inspired by Grand Theft Auto III, Thompson sought $246 million in damages from the publisher, Take-Two Interactive, along with PlayStation 2 maker Sony Computer Entertainment America and retailer Wal-Mart. The suit charged that the defendants knew or should have known that the game would cause copycat violence.[11] On October 22, 2003, the case was removed to the U.S. District Court for the Eastern District of Tennessee. Two days later, the plaintiffs filed a Notice of Voluntary Dismissal, and the case was closed.[12]

Thompson was involved in another similar suit in Alabama in 2005 on behalf of the families of police personnel killed by Devin Moore, a teenager who was reportedly a compulsive Grand Theft Auto player. However, his participation in the case ran into a dispute over his pro hac vice admission to practice law in that state. The opposing attorneys sought removal of this privilege by arguing that his conduct was unethical and claiming he had threatened and harassed them in letters and emails.[13] The judge added that Thompson had violated his gag order during Moore’s criminal trial. Thompson tried to withdraw from the case, but his request was denied by the judge, who went ahead and revoked Thompson’s temporary admission to the state bar. For his part, Thompson said he thought the judge was trying to protect Moore’s criminal conviction at any cost.[14]

In the aftermath of this lawsuit, Thompson lobbied Alabama attorney general Troy King to file a civil suit and call on retailers not to sell “cop-killing games.”[15] After the slaying of another police officer in Gassville, Arkansas by Jacob D. Robida, an 18-year-old fugitive, Thompson again raised the possibility of a connection to Grand Theft Auto, but investigators found no evidence that video games were involved.[16]

Thompson once reported that he had videotaped a Miami Best Buy selling a copy of Grand Theft Auto: Vice City to a 10-year-old. In a letter to Best Buy, he wrote, “Prosecutions and public relations consequences should fall on your Minneapolis headquarters like snowflakes.”[17] He eventually sued the company in Florida, arguing that it had violated a law against sale of sexual materials deemed harmful to minors. In January 2005, Best Buy agreed that it would enforce an existing policy to check the identification of anyone who appeared to be 21 or under and tried to purchase games rated “M” (for mature audiences).[18] No law in effect at the time prohibited selling "M" rated video games to juveniles.

In September 2006, Thompson filed a suit in Albuquerque, New Mexico against Sony, Take-Two, Rockstar Games, and Cody Posey, for the wrongful death of three members of Posey's family. The 69-page complaint filed by Thompson and Albuquerque attorney Steven Sanders argued that "obsessively" playing Grand Theft Auto: Vice City made violence "pleasurable and attractive," disconnected violence from consequences, and caused Posey to "act out, copycat, replicate and emulate the violence" when he shot and killed his father, stepmother, and stepsister. Thompson and Sanders filed the lawsuit on behalf of the surviving family members of Posey's father. According to Thompson, "Posey essentially practiced how to kill on this game. If it wasn't for Grand Theft Auto, three people might not now be dead."[19] The lawsuit claims that Thompson was told by a sheriff's deputy that the game and a Sony Playstation 2 were found at the ranch. The suit also claims that the game taught Posey "how to point and shoot a gun in a fashion making him an extraordinarily effective killer without teaching him any of the constraints or responsibilities needed to inhibit such a killing capacity."[20] Gary Mitchell, Posey's criminal defense attorney, said Thompson contacted him "numerous times" before the trial, urging Mitchell to highlight the game in Posey's defense, but Mitchell said he "just didn't find it had any merit whatsoever."[21]

On March 14, 2007 Take-Two filed a lawsuit to prevent Thompson from preventing the sale of Grand Theft Auto IV and Manhunt 2 to minors, claiming that Thompson's effort to block sales of its games through lawsuits violates the company's First Amendment rights. Responding, Thompson said, "I have been praying, literally, that Take-Two and its lawyers would do something so stupid, so arrogant, so dumb, even dumber than what they have to date done, that such a misstep would enable me to destroy Take-Two." On April 19, 2007, Thompson and Take-Two settled their suit, with Thompson agreeing not to restrict sales through any court worldwide of Take-Two's games, threaten to sue the company, or accuse Take-Two of any wrongdoing based on the sale of any of its games. Upon the game's 2008 release, Thompson called the game "the gravest assault upon children in this country since polio," and asked Minnesota Governor Tim Pawlenty to "pursue and file criminal charges against [Minnesota-based retailers] Target and Best Buy." He also sent a letter to Take-Two chairman Strauss Zelnick's attorney, addressed to Zelnick's mother, in which Thompson accused her son of "doing everything he possibly can to sell as many copies of GTA IV to teen boys in the United States". On May 1, 2008 Thompson appeared on the asserted that the game's sexual content made its sale to minors illegal, and that he was working with law enforcement to have criminal prosecutions brought. Thompson also filed a complaint with the Chicago Transit Authority about poster ads for the game at Chicago, Illinois bus stops.

In the mission Final Interview in Grand Theft Auto IV, Francis McReary orders Niko Bellic to kill a lawyer that Thompson says is based on himself. As Niko pulls out his gun, one of the lines that the lawyer can say is Jack Thompson's famous line: Guns don't kill people, video games do. Thompson threatened Rockstar Games that he would take any means necessary to ban the game if all similarities of himself are not removed. The mission is still in the game, but Thompson hasn't taken any further action. It is unknown if the similarities of himself have been removed or even existed in the first place. However, a possible parody of Thompson can be found in-game: the offices of a "Tom Jackson, Attorney at Law" in Alderney have been converted into a "Cash for Games" store [22].

Relationship with industry and gamers

Thompson's "high-profile crusades" have made him an enemy of video game aficionados.[19] On occasion, Thompson has sparred directly with the gaming industry and its fans.

During the course of Thompson's campaigns in favor of what he considered public decency, Thompson ran afoul of the Florida state judicial apparatus. Eventually, he was brought up on charges of professional misconduct and referred for disciplinary hearings before the Florida State Bar. The official report made at the disciplinary hearings included evidence of lying under oath, barratry through intimidation, distribution of obscene materials, and various incidents of libel and slander as well as incidents of professional misconduct. The recommended discipline from these hearings was disbarment. Thompson was permanently disbarred from the state of Florida on September 25, 2008.[1] Even after disbarment, Thompson still uses the legal system as a weapon against critics[23]. Thompson appealed his disbarment to the United States Supreme Court in April 2009 [24]. Though the disbarment occurred in Florida, it will prevent him from obtaining a license to practice law in any other state[25]. The U.S. Supreme Court declined his request for an appeal[26]; as the highest court of law in the United States, there is no further venue for him to challenge his disbarment.

Retrieved from ‘https://www.grandtheftwiki.com/index.php?title=Jack_Thompson&oldid=62243’
Category:
Cookies help us deliver our services. By using our services, you agree to our use of cookies.