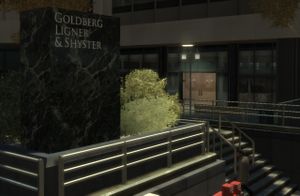 Co-founded by Tom Goldberg and Patrick Ligner, Goldberg, Ligner & Shyster centers its operation around legal actions against "corruption and vice in the highest echelons of society", having, among others, participated in litigation involving Betta Pharmaceuticals (2001), Pirate Music (2004), and Rusty Brown's Ring Donuts (2006); its high profile nature makes it well known among the legal circle as well as various high ranking individuals, companies and organizations who are likely to be threatened by GLS. The firm also touts itself as choosing not to demand legal fees for its services if it is "pro bono publico" (for the public good). By 2008, the firm adds one more partner, Dick Shyster, after which the company gets its actual name. In addition to legal work, GLS donates part of its revenue to "Goldberg's Guys", a recently-formed charity organization which primarily helps disadvantaged boys learn to swim. Tom Goldberg is known to be actively involved in the organization's activities. The firm also has a website at www.goldberglignerandshyster.com.

Other known employees who work at the law firm are Kiki Jenkins, one of Niko's internet girlfriends in GTA IV, and Dave Grossman, a friend of Billy Grey in "The Lost and Damned".

Francis McReary had been uneasy about the possibility of GLS acting against him. In response, he instructs Niko Bellic to infiltrate the firm by masquerade as a job applicant, retrieve evidence that incriminates McReary, and kill Goldberg. Following Goldberg's death, Shyster is mentioned to have taken over many of Goldberg's cases.

Goldberg, Ligner & Shyster bases its operation on the ground levels of "44 Amethyst Street" at The Exchange in Algonquin, Liberty City. Its office boasts an interior that features a sleek three-storey lobby and atrium, as well as three office rooms; two are supposedly utilized by GLS's employees, while one is used by Goldberg himself. It is unknown where in the office Ligner and Shyster work.

The player can in fact access the lobby area at any point of the game. The lobby can be entered via the main entrance, as implied by its address, at the Amethyst St-Bismarck Ave intersection that connects to the upper lobby, and two secondary entrances from the South Parkway-Bismarck Ave intersecion and from Castle Gardens station that grant access to the lowest portion of the lobby. The office areas, which also houses two elevators access points, are only accessible during "Final Interview".