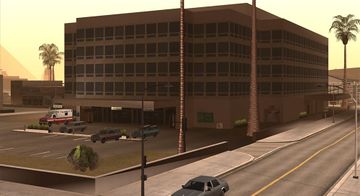 The design of the hospital is relatively simply, with two entrances in the building, one facing the Las Venturas Airport, where the player would respawn to after being killed within the boundaries of Las Venturas, and one facing Redsands West. The hospital also has a parking lot, which spawns numerous vehicles, particularly an Ambulance, while other parked vehicles are random, usually spawning 3 of the same vehicle, if not, at least a pair of duplicates will be present every time.

Prominent use in mission

The hospital is prominently featured during "Intensive Care", during which Ken Rosenberg asks you to pick up Johnny Sindacco from the hospital, only to find out that the Forelli Family has ambushed Johnny's ambulance. During the mission, a Patriot will spawn in the parking lot for the player to use at their own choosing.

Retrieved from ‘https://www.grandtheftwiki.com/index.php?title=Las_Venturas_Hospital&oldid=414073’
Categories:
Cookies help us deliver our services. By using our services, you agree to our use of cookies.