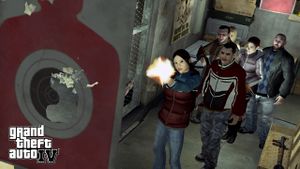 Members of the Gun Club firing at a target

The Liberty City Gun Club, evidently based in Liberty City, effectively takes over the functions of the Ammu-Nation chain as a gathering place for gun owners, as GTA IV replaces Ammu-Nation with underground arms dealers, a change explained to have been the result of Mayor Julio Ochoa's effort to remove the sale or possession of illegal firearms from the city, as well as launching a lawsuit against Ammu-Nation nationwide. Prior to the disappearance of Ammu-Nation, both Ammu-Nation and the LCGC were reported on the radio to maintain an alliance.

Like Ammu-Nation, the LCGC's primarily serves as a platform for members to uphold of the Second Amendment to the United States Constitution, the right to keep and bear arms, and oppose Mayor Ochoa's policies, all while spending time training members with the use of firearms, socializing, drinking and even organizing speed dates for gun owners. Members of the LCGC believe that if every citizen was armed, no one would be "dumb enough to shoot anybody", a notion that they claim the founding fathers of the United States believed in when they drafted the country's Constitution.

The LCGC's advertising is very similar to those of Ammu-Nation in earlier games, featuring the rugged voice of an American man, arguing large purchases of firearms while getting drunk is the American way. It also copies elements of advertising from previous Ammu-Nation advertising, such as the association of women's breasts with guns.

In Grand Theft Auto: Chinatown Wars, the Liberty City Gun Club is located near Francis International Airport, below the Pay 'n' Spray. The player character, Huang Lee, is a member of the club, and may use purchase illegal firearms from the club's Ammu-Nation arm, or train with different weapons inside the building as a side mission.

Weapons training in the gun club consists primary of a series of courses which the player may complete within an allocated time, collecting as much points as possible to gain medals, depending on the accumulated score. There are a total of five courses, each related to a specific class of firearms. If the player achieves a gold medal for all 5 courses, they receive a discount for weapon purchases from Ammu-Nation.

The rules of the courses are as applied:

Retrieved from ‘https://www.grandtheftwiki.com/index.php?title=Liberty_City_Gun_Club&oldid=402615’
Categories:
Cookies help us deliver our services. By using our services, you agree to our use of cookies.