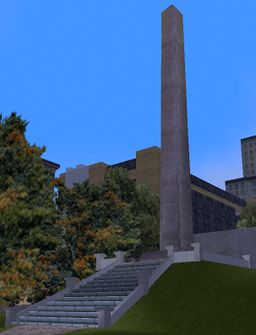 The obelisk in Belleville Park.

The Liberty City War Memorial is a monument in Staunton Island. A monument in Shoreside Vale could also be a war memorial, memorializing those who fought for freedom 1936.

The War Memorial in Staunton Island is located in Belleville Park east of underground lavatories. It consists of a staircase leading up to the raised platform with an obelisk. The memorial is of no relevance in Grand Theft Auto III but it is the setting for two missions in Grand Theft Auto: Liberty City Stories: "See the Sight Before Your Flight" (sight 6) where the player takes pictures of the memorial for a veteran, and "Crazy '69'" where Forelli members were killed at the memorial.

The Shoreside memorial is located in Francis International Airport at the entrance of the Shoreside Terminal subway station. Unlike the Staunton memorial, this is a statue formed by a kneeling soldier holding a flag and traffic cone on the head.