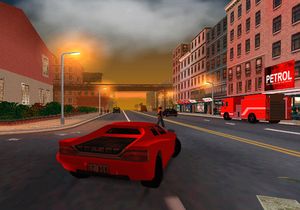 The school in an early prerelease screenshot of GTA III, seen here on the left.

The Old School Hall is a building in Chinatown, Portland, Liberty City, next to the entrance to Callahan Bridge. It is one of the destinations for Taxi Driver side mission in GTA III. During the mission "The Fuzz Ball," a police ball is held there, and Claude is instructed by Luigi Goterelli to deliver his prostitutes to the ball.

The Old School Hall was originally functional school in the game, complete with children and School Buses around the area. However, these were all removed from the game; this is believed to be due to the concern of killing children ingame. Prerelease images show that the building had bright walls and plants around it. The textures has changed since then but the overall structure seems intact.

Retrieved from ‘https://www.grandtheftwiki.com/index.php?title=Old_School_Hall&oldid=329207’
Categories:
Cookies help us deliver our services. By using our services, you agree to our use of cookies.