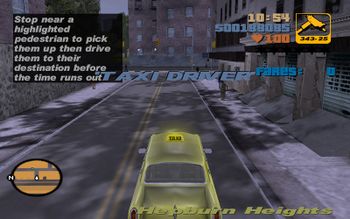 In the GTA III era games and GTA Chinatown Wars, the player can earn money by delivering pedestrians to their predetermined destination within a time limit. Starting the mission lights up the taxi's roof-mounted taxi sign encouraging nearby pedestrians to flag the player's taxi down. Once a pedestrian enters the vehicle, the destination is displayed on screen and is marked by a blip on the radar and a colored marker at the destination itself. The allotted time given is calculated roughly from the distance to the destination, and an additional 30 seconds (10 seconds for other GTA III Era games) is granted upon completing a fare to find another one. If the player runs out of time, exits the vehicle, or damages their vehicle too badly, the passenger will flee, ending the mission. In games after Grand Theft Auto: San Andreas the taxi side mission adds a "tip meter" which rewards players for delivering fares quickly and safely and punishes them for driving recklessly or taking too long.

In Grand Theft Auto IV the mission is no longer possible to complete in a normal taxi. Instead, Niko can perform the taxi side mission by phoning Roman Bellic for fares. Following the mission Jamaican Heat, Niko can call Roman to drive a fare; Roman will give the location of the customer and his/her destination. After the mission Roman's Sorrow, the missions will no longer be available as Roman's cab business was burned down. However, after the player completes all ten taxi missions, Roman will text Niko and say that the other drivers were getting jealous of Niko taking all the fares.

Retrieved from ‘https://www.grandtheftwiki.com/index.php?title=Taxi_Driver&oldid=414195’
Categories:
Cookies help us deliver our services. By using our services, you agree to our use of cookies.