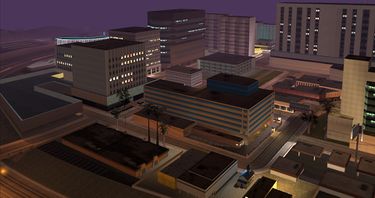 Roca Escalante, Las Venturas, as viewed to the southeast in GTA San Andreas.

Roca Escalante is mainly a commercial district, featuring a number of businesses and hotels, as well as buildings for public use.

Carl Johnson's arrives at Las Venturas through an invitation by Wu Zi Mu, leader of the San Fierro Triads and the owner of The Four Dragons Casino, a casino down at The Strip. Carl learns of Woozie's woes regarding competition, especially with regards to the Mafia; they own Caligula's Palace, another casino at The Strip, and mafia families (Leone Family, Forelli Family, Sindacco Family) have been sabotaging the new business venture. As Carl learns this, he, along with Woozie, is poised to pull off a heist at the mafia-run casino.

One of the steps Carl has to do before the actual heist takes place is to steal four police motorbikes. These are to be used as outriders for the van they would put all the money in. Carl goes to Roca Escalante twice, once outside the LVPD Headquarters and another time nearby the V-Rock Hotel to steal the police motorbikes. Carl then takes the two motorbikes, along with two other found in the other parts in the city, to a moving Packer circling the Julius Thruway.

Retrieved from ‘https://www.grandtheftwiki.com/index.php?title=Roca_Escalante&oldid=373108’
Category:
Cookies help us deliver our services. By using our services, you agree to our use of cookies.