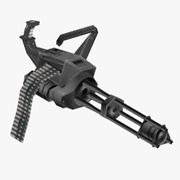 One of the most powerful weapons in the Grand Theft Auto series, the Minigun is based off various US minigun models, appearing in various forms in the following games:

The GTA Vice City and GTA San Andreas renditions are based on a man portable version of the M134 Minigun, while the GTA Liberty City Stories version is based off the M197 tri-barreled Gatling. It has an incredible rate of fire and can annihilate most vehicles in almost less than a second around a certain radius. In Vice City, the minigun mows down targets level with the player; however, it is impossible to aim manually. Instead, it shoots upwards automatically to e.g. helicopters, similar to the Rhino. In GTA San Andreas, thanks to the new aiming system, it is possible to aim the minigun in any direction, making shooting higher targets much easier, but also dangerous if the target aircraft may explode and fall on the player. It is almost 100% accurate as there is no recoil, but it can't lock on to a target which isn't much of a problem due to the very high power of each individual round and the amount of ammo it carries. In GTA Liberty City Stories and Vice City Stories, the player can both lock onto a target and shoot manually with the minigun.

For GTA IV, the minigun was planned to be the second heavy weapon, the first one being the rocket launcher, but it was dropped in the end, due to unknown reasons. By using the remaining data in-game, it appears to carry a 750-bullet load and to be able to kill any person (armored or not) with one shot, making it the most powerful weapon in the game. Miniguns are also mounted on Annihilator and Buzzard helicopters. Both fire normal 7.62×51 millimeter cartridges, but the Annihilator fires about 1,000 rounds per minute, which is unrealistically slow, by about 5,000 rounds per minute. This is probably to prevent helicopter pilots from being able to literally shred players and vehicles. In The Lost and Damned, the helicopters' top speed is increased and the minigun ammunition is replaced by highly explosive cartridges that make mince meat out of pedestrians, cars, motorcycles, and even other helicopters and boats. On the Buzzard, which only appears on The Ballad of Gay Tony, there are 2 miniguns mounted, which do not overheat or need to reload and fire about 4,000~6,000 rounds per minute.

In GTA V, the minigun no longer has a fixed magazine size; the minigun will continue to fire whenever the player has ammunition. However, it is not as powerful as its previous renditions; destroying a vehicle requires sustained fire on the engine or fuel tank instead of simply aiming anywhere and firing only a few rounds. The player cannot sprint while holding the minigun, and it cannot be used from cover. The minigun makes a prominent appearance in the mission The Paleto Score, where Trevor Philips holds back crooked law enforcement and military while wearing bomb squad armor.

The minigun can be purchased at Ammu-Nation in Los Santos and Blaine County.

Retrieved from ‘https://www.grandtheftwiki.com/index.php?title=Minigun&oldid=415576’
Categories:
Cookies help us deliver our services. By using our services, you agree to our use of cookies.