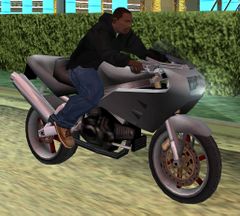 The player on an FCR-900 in GTA San Andreas.

The FCR-900 is a motorcycle in Grand Theft Auto: San Andreas.

Based on a Honda CBR900RR, the FCR-900's design may be described as being more aggressive and sporty than both the similarly designed PCJ-600 and BF-400, but is further available in a variety of designs. The FCR-900 is also a rare vehicle. In terms of its body, FCR-900 may be available with any one of three variations:

There are also three different exhaust pipes and the rims can come in a variety of colors (this is the vehicle's secondary color). The bike may also come with single (left or right) or twin exhaust pipes.

The FCR-900 is designed as one of the more high-powered commercial motorcycles in GTA San Andreas, besting both the PCJ-600 and BF-400, but still remaining inferior to the NRG-500; thus it is the second fastest bike in the game. Due to its moderately heavy weight, however, the bike possesses poorer cornerning (often requiring the aid of the e-brake) and sluggish acceleration, which occasionally results in the need for the player to lean forward while on the bike to provide a slight boost in speed and acceleration.

Retrieved from ‘https://www.grandtheftwiki.com/index.php?title=FCR-900&oldid=374851’
Categories:
Cookies help us deliver our services. By using our services, you agree to our use of cookies.