"Beautiful gun, this one. I've got lots of guns. Then again, I'm a collector and never use them on people, unless they ask for it. Guns really are like works of art and should be kept on the wall or in the hands of sensible people who know how to handle them, like contract killers."
-Vice City Bureau of Investigation file description.

The Pump Action Shotgun is one of the many shotguns available throughout the Grand Theft Auto series of games. 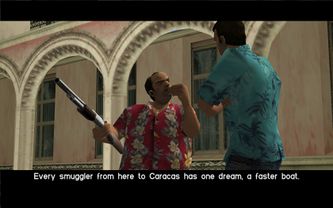 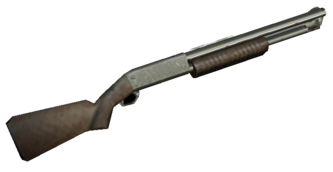 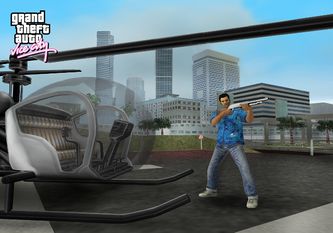 A unique quality attributed to the shotgun is that is fires several projectiles at once, and at close range two accurate spreads will destroy most non-bulletproof vehicles. The shotgun pellets can also knock down enemies. Another advantage is that it can be purchased at most Ammu-Nation stores for a cheap price, or found in police cars, making it one of the more powerful yet inexpensive weapons.

A large disadvantage with this shotgun is that the player cannot run with it (minus in GTA Liberty City Stories, GTA Vice City Stories, GTA IV, and GTA V). The pump mechanism has a very slow rate of fire, so it cannot be used effectively against multiple enemies in different directions. Lastly, it is easily outranged by the rifles.

In Grand Theft Auto III, the shotgun's in-game model is a Remington 870 Police Magnum with a handle grip and a foldable stock in the retracted position. While obscured in game in GTA Advance, the shotgun icon for GTA III was reused for Advance, implying the shotgun in GTA Advance is similar to that of GTA III. For GTA Vice City (where it is internally known as the "Chrome Shotgun") and San Andreas, it resembles an Ithaca 37 with a fixed wooden buttstock. For GTA Liberty City Stories and GTA Vice City Stories, it is a Browning 0/U shotgun, although it incorrecly functions like a pump shotgun when it is a break open shotgun in real life (meaning it can only hold two shells at a time).

In Grand Theft Auto IV, it is an Ithaca 37 Stakeout but it has a side-mounted ejection port instead of the Ithaca's underside loading/ejection port, and it doesn't have a loading port at all, has a short barrel, and magazine tube with a pistol grip similar in design to the Stubby Shotgun due to it being based on an airsoft version of the Ithaca 37. The shotgun holds eight shells, however the length of the barrel and magazine tube should only hold four.

In Grand Theft Auto: Chinatown Wars it resembles a Remington 870 that has its stock removed and barrel shortened. It goes back to its pre GTA IV function as being reloaded after each pump though like GTA IV it can be found in police cars and be purchased from Ammu-Nation.

The Pump Shotgun can be purchased from the back-alley gun shops for $1200, and each additional magazine is worth $100. The Pump Shotgun is not available from Little Jacob. The LCPD, NOOSE, and FIB, in addition, use this gun as a secondary weapon. It can be picked up from them when they are killed. This gun, rarely used on multiplayer but extensively used on single player, is extremely powerful. It will kill any single player foes with one shot (even fully healthy and fully armored ones at point blank), and the most needed for multiplayer will be about 3 or 4 leg shots. This is a 1 hit kill at close range on any part of the body. It can't be fired from vehicles.

Retrieved from ‘https://www.grandtheftwiki.com/index.php?title=Pump_Action_Shotgun&oldid=418364’
Categories:
Cookies help us deliver our services. By using our services, you agree to our use of cookies.