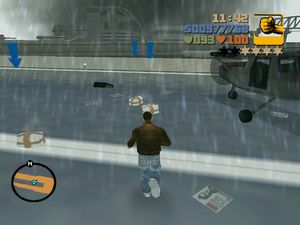 Claude about to collect packages of SPANK in the mission S.A.M. Notice the resemblance between these and the Hidden Packages.

SPANK is a drug first introduced in Grand Theft Auto III. Produced by the Colombian Cartel of Liberty City, the drug serves as a plot device throughout GTA III.

According to a Liberty Tree article, SPANK is a white powder that is normally snorted and is extremely expensive, very similar to cocaine which is probably used as an ingredient. It can also be placed up the user's rear and, among more serious users, taken as a suppository (which might explain the name of the drug). It takes a serious toll on the user's sanity, similar to meth. One of the first people to try it was notable house and dance music DJ Boy Sanchez in 1998.

Retrieved from ‘https://www.grandtheftwiki.com/index.php?title=SPANK&oldid=375900’
Categories:
Cookies help us deliver our services. By using our services, you agree to our use of cookies.