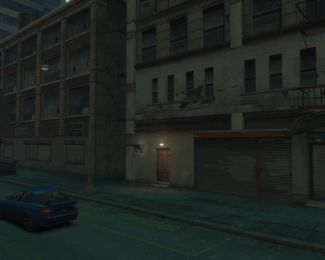 Exterior of the Alderney safehouse in GTA IV.

The Alderney safehouse is the last safehouse acquired by Niko Bellic in Grand Theft Auto IV. The safehouse is located at the southern half of Mahesh Avenue in Alderney City, Alderney, near the Booth Tunnel.

The safehouse is given by Pegorino Family capo Ray Boccino. After completing sufficient work for him, Ray decides Niko would want to stay in Pegorino territory even more, which is Alderney. Specifically, the safehouse is acquired after completing the first of Ray's missions, A Long Way to Fall, along with one mission in Alderney (either Derrick McReary's Smackdown or Phil Bell's Truck Hustle) (some walkthroughs suggest all of Ray's missions need to be completed, but it's been confirmed on PS3 that you need only complete one Ray mission plus one of the Alderney missions mentioned).

In awarding the safehouse, Ray tells Niko that Roman Bellic will be fine on his own; although this implies that the Algonquin and Bohan safehouses are being locked, in fact there is no change in their status and the other safehouses can continue to be used as save points as usual. Indeed, if the player wishes to continue with friendship outings and dating, it makes more sense to keep Niko based out of Algonquin or Bohan.

Similar to the first two safehouses in the game, the safehouse is modest and worn down. It has a post-bed for saving the game, a wardrobe to change clothes, a working TV (the smallest in the game), a greasy-splattered kitchen, and a ruined sofa. For these reasons, the safehouse is not comparable to the preceding safehouses that the player may acquire in Middle Park East and Northwood, Algonquin. A handful of items can be found in the safehouse, such as stacks of newspapers and phone books. As with the other safehouses, it also has a parking place for saving two vehicles. It is about two blocks from a helipad where a chopper spawns (head to the western entrance of the Booth Tunnel and head east, above ground, and the chopper pad will be seen by the edge of the water).