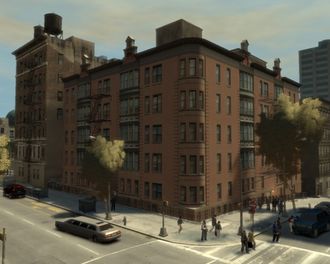 The apartment housing Playboy X's penthouse. The main entrance into the penthouse is located on the left side of the building.

Playboy X's Penthouse, or the Northwood safehouse, is one of Niko Bellic's possible safehouses in Grand Theft Auto IV. It is located in Northwood at the Xenotime St-Galveston Ave intersection.

The safehouse was originally purchased by Playboy X in 1993 when his mentor Dwayne Forge was arrested of a drug crack-down. Playboy X lived there until 2008 in the events of Grand Theft Auto IV where if the player decides to kill Playboy in The Holland Play, Dwayne will give Niko the penthouse as a gift.

If the player decides to kill Dwayne, the safehouse remains Playboy X's, but the player can still gain access by landing a helicopter on the roof - the patio doors are permanently open, although none of the features inside can be used. The player can also access the penthouse by parking an SUV or other high-roofed vehicle at the bottom of the fire stairs and climbing up them. The player can also own up to 2 cars/vehicles in the parking space, including possibly Playboy's gold Patriot (however this vehicle may not spawn after Playboy's death, especially if you leave a vehicle parked in the parking space).

Around the same time of acquiring this safehouse, Roman buys another one in Algonquin. Together, the Algonquin safehouses are vastly superior to the South Bohan Safehouse and the safehouse that follows in terms of their condition and facilities. It is unknown if Niko shared this safehouse with Roman, as they had shared all their other safehouses (the fact Niko cannot engage in "coffee" with his dates there, even if he brings them there to play pool, suggests they may share it).

It has a Panoramic wide screen television, jacuzzi, pool table, punching bag and an outfit based on the clothing style of Claude from Grand Theft Auto III in the penthouse's wardrobe; the penthouse itself has no internet, but you can use the guard's computer downstairs, in the lobby - interestingly, the monitor bears the Tw@ desktop when not in use. Niko can't play pool by himself, but can play against friends and dates. This pool table does incur quite a few unwanted glitches. Animations of characters setting up shots are often in incorrect directions and the balls often fall off the table when hit very hard towards corners. When the player picks up a friend or date, it won't be listed on the map, but the player can still walk through the door and take the elevator, regardless. (However, Niko cannot enjoy "coffee" with his dates in the penthouse; he needs to take them back to their own homes.) The penthouse also includes photographs of a child Playboy X and Dwayne, evidence of the penthouse's previous owner and his associate.

From the bedroom there is an open double-door which leads out onto a wood and stone-floored patio. There are deck chairs and a sunshade, a hot tub and a gas barbecue outside with an explosive gas canister. The player can exit the patio by going down the fire stairs at one side, or can jump across to the adjacent building and take the internal stairs straight to street level. A fall from the patio can kill the player.

Lost and Damned and The Ballad of Gay Tony

The penthouse can be accessed during both of the DLC games The Lost and Damned and The Ballad of Gay Tony. Both require the use of a helicopter to land on the roof, and then jumping down into the penthouse garden. The elevator to the lobby, save point, wardrobe and TV are disabled, however, and friendship outings to play pool are not allowed. As noted in "Trivia," below, this is a good place to attempt the One Man Army achievement during the DLCs. To exit, it's possible to climb back on the roof to the chopper; alternately, the fire escape or the next door building can be used to exit. The lobby is also accessible from the ground level, complete with its free Internet, and as with all GTA IV safehouses, the parking spot in front remains available for storing vehicles. In The Ballad of Gay Tony, the penthouse is located only a block from Luis Fernando Lopez' safehouse. 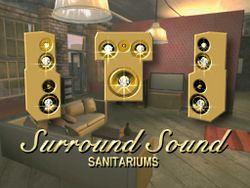 A pre-release version of the penthouse's living space glimpsed on I'm Rich in GTA IV.
Retrieved from ‘https://www.grandtheftwiki.com/index.php?title=Playboy_X%27s_Penthouse&oldid=378594’
Category:
Cookies help us deliver our services. By using our services, you agree to our use of cookies.