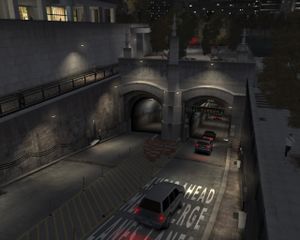 The Alderney end of the Booth Tunnel in GTA IV.

The Booth Tunnel is a road tunnel connecting Algonquin with Alderney in the Grand Theft Auto IV rendition of Liberty City.

Designed as the only road tunnel to link two islands in Liberty City, the Booth Tunnel, along with the Hickey Bridge to the north, are the only points of access into Alderney via car; it connects northern Westminster in Algonquin to southern Alderney City in Alderney. While the tunnel is a four lane, two direction connection, the tunnel's road bottlenecks to two lane throughfares at both ends of the tunnel, occasionally resulting in the player encountering difficulty exiting one end of the tunnel, especially at the Alderney end, which may not provide sufficient room for the player's car to squeeze though its opening. The prominent mission it was used in was the Tunnel of Death.

The tunnel is guarded by the LCPD officers with police-booths at both ends, which may occasionally depict a police officer inspecting the trunk of a parked car; the tunnel also comes equipped with LED signage that inform drivers of safety tips and security announcements. Mavericks also spawn on helipads at both ends of the tunnel: One over the Alderney end of the Booth Tunnel and the other in front of the tunnel's ventilation tower on the Algonquin end; the latter is a popular spot for multiplayer, especially for Free Mode. In The Ballad of Gay Tony, a Swift initially spawns at the Algonquin end, only to be replaced by a Buzzard upon completion of the game's storyline.

Retrieved from ‘https://www.grandtheftwiki.com/index.php?title=Booth_Tunnel&oldid=357684’
Categories:
Cookies help us deliver our services. By using our services, you agree to our use of cookies.