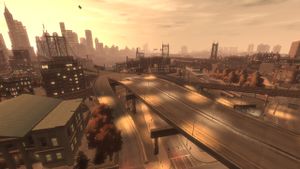 Of all the Expressways in Liberty City, the Algonquin-Dukes Expressway possesses the most freeway-like features, with sophisticated exit/entrance infrastructure and isolation from road networks. Other Expressways do possess these features, but not for their full lengths.

It is most likely based off of the Midtown-Queens Expressway (Interstate 495) being part of the Long Island Expressway in New York City.

The freeway travels West - East from the Lancet, Midtown Algonquin to Francis International Airport, Dukes Albany Avenue intersection. There are four exits/entrances between these two termini.

The freeway extends east across the Algonquin Bridge over Colony Island from this intersection. There is about a mile of road before the second intersection.

Northbound, Southbound and Westbound exits are available from this intersection.

Upon reaching the Broker coastline the freeway is elevated over the districts of BOABO and Rotterdam Hill before it extends over the Broker Bus Terminal and Montauk Avenue in Downtown. Four slip roads allow entrance and exit in both directions, bringing drivers down to street level. The two entrance roads are located along Montauk Avenue as is the Westbound exit road, the Eastbound exit road however brings drivers slightly further West onto Munsee Avenue.

This intersection is a very important transport link for residents of Western Broker and Dukes as it is positioned very close to the two borough's boundaries and serves as their primary means of accessing Midtown Algonquin. It is particularly conveniently positioned for residents of Schottler, Cerveza Heights, Rotterdam Hill, BOABO and Outlook.

The freeway travels further east through Schottler, gradually decreasing its gradient as it passes over the Broker-Dukes Tunnel and briefly enters the Cerveza Heights neighborhood of Dukes. The freeway then begins falling below street level into a small valley. The freeway now passes under Stillwater Ave before re-entering Broker and Beechwood City. The freeway's third intersection is located here.

Similar to the second intersection, entrance and exit is provided to and from the freeway here by four slip roads; as the freeway is below-grade however, the slip roads elevate rather than slope downwards. The four roads provide access to a fairly green part of Beechwood City along Saratoga Avenue. Travelling south along Saratoga Avenue provides almost immediate access to intersection 9 of the Broker - Dukes Expressway whereas travelling north along the Avenue will cross you over the Dukes border into the thriving Willis district.

Traffic is light throughout the Expressway.

Retrieved from ‘https://www.grandtheftwiki.com/index.php?title=Algonquin_-_Dukes_Expressway&oldid=326124’
Categories:
Cookies help us deliver our services. By using our services, you agree to our use of cookies.