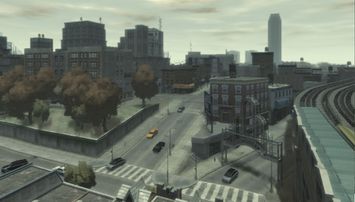 Schottler as viewed to the northeast from its southeasternmost boundary. Note the "Schottler" arch to the lower right.

Schottler is a neighborhood in central Broker, Liberty City in Grand Theft Auto IV. It is bordered to the northeast and to the north by Thornton Street (Cerveza Heights); to the west by Montauk Avenue (Downtown); to the south by Earp Street (South Slopes); and to the east by Wenrohronon Avenue (Beechwood City).

Schottler is a residential area, made up mostly of housing apartments, with a very diverse population. A sizable number of Jamaican immigrants reside in the neighborhood, presumably due to Schottler's proximity to largely Jamaican Beechwood City.

Points and people of interest 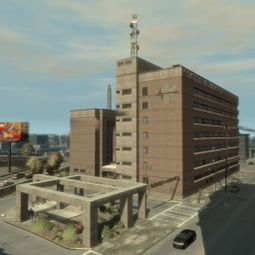 Schottler houses Broker's medical services in the form of the Schottler Medical Center, located at the intersection of Tuscorara Avenue and Cassidy Street. Schottler Medical Center is a large hospital and is one of the only two hospitals that may be entered by the player in the Liberty City metropolitan area (Westdyke Memorial Hospital in Westdyke, Alderney being the other). Other prominent landmarks located within the boundaries of Schottler include the "Schottler" arch at the southern end of Cayuga Avenue, and an unnamed public library facing Soldiers Plaza on the northeastern edge of Outlook.

Two prominent characters are known to be associated with the neighborhood. "Little" Jacob Hughes resides in Schottler, specifically on Dillon Street, while Jon Gravelli is stated to have resided in the Schottler Medical Center from 2005 until his death upon completion of GTA IV's storyline. Also located on Dillon Street, an abandoned hardware store is also located here, which serves the purpose of a backroom gambling establishment.

Schottler is based on the real life district of Bedford-Stuyvesant in Brooklyn, New York City, although the district's one landmark (the "Schottler" arch) is inspired by its real life equivalent in Sunnyside, Queens. The public library affront Soldiers Plaza is based on the Brooklyn Public Library.

Schottler is served by one of two Liberty City Subway stations in Broker. The station is located at the intersection of Sundance Street and Seneca Avenue in neighboring South Slopes.

Retrieved from ‘https://www.grandtheftwiki.com/index.php?title=Schottler&oldid=412844’
Category:
Cookies help us deliver our services. By using our services, you agree to our use of cookies.