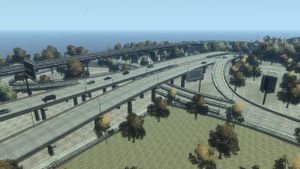 The Broker-Dukes Expressway is a major road running from Algonquin to Dukes through Broker, Liberty City. It is a highway that runs mostly along the north and eastern edge of East Island, and central Broker of Liberty City, and links broker, and Dukes from each other. The Highway runs through areas in Algonquin, Broker and Dukes, including Chinatown, Hove Beach, Firefly Projects, Beechwood City, Francis International Airport and Meadows Park. It is based off of the real life Brooklyn-Queens Expressway (Interstate 278) in New York City. The Broker-Dukes Expressway is one of the longest continuous roads in Broker and Dukes, and is central to two of Brucie's Races.

No Exits or Entrances are numbered in the game, so they will be listed in order from where it begins after the Albany Avenue intersection, to where it ends at the intersection of Dukes Boulevard and Hewes Street, Steinway.

This is when Diamond Street in Chinatown intersects with Albany Avenue, immediately following the green traffic light and continuing straight Diamond Street turns into the Broker Bridge, and Broker-Dukes Expressway. If you are coming the opposite way and finishing the Expressway and the bridge, going straight on Diamond Street will take you through Chinatown. Making a right takes you north to Lower Easton and northern districts. Turning left takes you south to The Exchange until Albany Avenue ends when it intersects with South Parkway.

2. Boundary of Hove Beach and Outlook

Immediately after leaving the Broker Bridge from Algonquin is the Oneida Avenue Overpass in the boundary of Hove Beach and Outlook. Leaving the freeway will take you to Hove Beach or Downtown Broker. Driving straight will bring you to the large intersection in Firefly Projects, where the freeway structure runs between.

Hickcock Street, Sundance Street, Tutelo Avenue and Carson Street connect eastern Broker neighborhoods and the expressway. These intersections enables you to access the eastern areas like South Slopes, Schottler, Beechwood City or even Downtown Broker and Outlook conveniently from the expressway. These intersections are guided by traffic lights, making the traffic to move slow.

This part of the Broker-Dukes Expressway probably was a part of Mohegan Avenue, which is currently divided into two parts - near the Burger Shot in Beechwood City and Firefly Projects. There are some old avenue leftovers underneath the expressway between Carson Street and Tutelo Avenue. Being upgraded to an expressway, it explains the presence of these frequent intersections.

It is the most convenient entrance / exit to Willis and Cerveza Heights to / from the Broker-Dukes Expressway. Moreover, you may access Algonquin-Dukes Expressway in Saratoga Avenue, or you have to make a loop in Francis International Airport to access. The Saratoga Avenue intersection is the only way for the traffic from the Airport to enter the expressway southbound.

You may drive to the Francis International Airport using the connect road built to the Broker-Dukes Expressway. It is the easiest way to access the Airport from southeastern Broker or northern Dukes. You can only make an exit to the airport here, but not an entrance to the expressway.

Vehicles from Francis International may enter the expressway northbound in the northwestern part of the Airport area. Being one of the major exit of the Airport, the traffic is very high and traffic jams and accidents seem to be happening very often.

You may drive to the Cleves Avenue, Meadows Park (near Pavillion Towers) and Willis area through this intersection. There is a gas station for the cars to replenish gasoline.

This is the end of the northern side of the Broker-Dukes Expressway. Its continuation is the Dukes Boulevard, which is a major road in Dukes. You may go to Steinway and Bohan if you turn right using the not far Dukes Bay Bridge. Continuing on the Dukes Boulevard will take you through East Island City, Cerveza Heights, and then to Downtown Broker. If you make a left on Hewes Street you go into Meadows Park, and eventually reach the McReary household. As the intersection is the major intersection of northern Dukes, the traffic is quite high here.

Retrieved from ‘https://www.grandtheftwiki.com/index.php?title=Broker-Dukes_Expressway&oldid=360996’
Categories:
Cookies help us deliver our services. By using our services, you agree to our use of cookies.