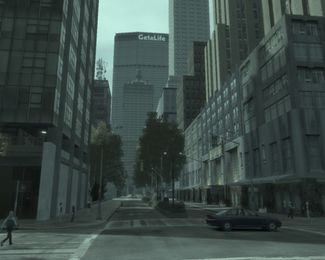 As is any midtown Algonquin neighborhood, Lancet is occupied by a large number of skyscrapers. The GetaLife Building in Easton is visible in this view of Lancet to the south from Bismarck Avenue, which evokes that of Park Avenue's in Manhattan, New York City.

Lancet is a five-block, seaside neighborhood in Algonquin, Liberty City. The neighborhood is located along the Humboldt River, and borders Easton and Presidents City to the south by Jade Street, Star Junction to the west by Columbus Avenue, and Hatton Gardens to the north by Lorimar Street.

As is most midtown Algonquin districts, Lancet is heavily developed and populated by towering skyscrapers, both old and new. The area is similar with the real-life Turtle Bay and Kips Bay in New York City (based on its proximity with the UN Headquarters). However, several landmarks in Lancet are not necessarily based on buildings native to the bay area and draw inspiration from locations inland. Likewise, neighboring Hatton Gardens share certain attributes with Lancet, essentially linking the two districts more closely.

Lancet does not have access to train services within the neighbourhood. However, neighboring areas do, with Manganese East station on the Algonquin Outer Line in Hatton Gardens and the Easton interchange in Easton located roughly one or two blocks away from Lancet's limits.

Retrieved from ‘https://www.grandtheftwiki.com/index.php?title=Lancet&oldid=366998’
Category:
Cookies help us deliver our services. By using our services, you agree to our use of cookies.