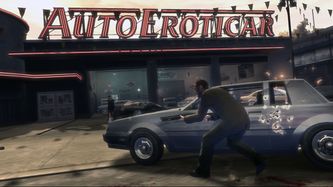 Niko Bellic taking cover behind a car at Auto Eroticar during the mission Payback.

Auto Eroticar has a website displaying super cars and sports cars posted for sale, including the Turismo, the Coquette, the Banshee and Gracie Ancelotti's Feltzer, but none of these specific vehicles are ever physically at the lot.

After the Pavano's attempt to kill him, Jimmy Pegorino has Niko Bellic follow a Pavano vehicle from a diner in Alderney. Pegorino believes they are going to meet with other members of the Pavano family about their Alderney bookmaking operation. Bellic follows the Pavanos to Auto Eroticar where he wipes out all of the assembled Pavano goons.

Retrieved from ‘https://www.grandtheftwiki.com/index.php?title=Auto_Eroticar&oldid=402321’
Categories:
Cookies help us deliver our services. By using our services, you agree to our use of cookies.