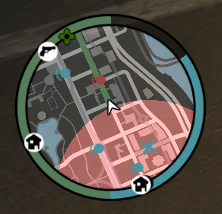 Upon gaining a wanted level a police search radius is centered around the player.

A Wanted Level in Grand Theft Auto IV and its expansions is a measure of how much the player is wanted by Liberty City law enforcement, and therefore how much force will be used in pursuit of the player. As in previous games, the GTA IV's Wanted Level is measured on a six-star scale, ranking police lethality from the non-lethal one star to the extremely aggressive six stars.

Relatively minor crimes committed within sight of the police may attract one star. Committing serious crimes is likely to earn multiple stars outright — for example, killing or wounding a police officer with a firearm results in an immediate three star Wanted Level, rather than a two star Wanted Level like in previous GTA games.

Wanted Level stars are cumulative — repeatedly committing "one-star" crimes within sight of police may lead to a two-star rating, and so on.

Once the player has a Wanted Level, LCPD officers give chase and attempt to arrest the player; if caught, the player is transported to the nearest police station and released a few hours later after a fine (10% of the player's current cash balance) and the confiscation of all weapons.

As the player's Wanted Level increases, law enforcement spends less energy trying to arrest the player and more trying to kill the player at all costs. As such, it is almost impossible to get arrested at a Wanted Level of three stars or higher, although police will attempt vehicular arrests if the opportunity arises.

Unlike GTA III era games, Wanted Levels cannot be reduced by picking up police bribes, as these no longer exist; the Pay 'n' Spray service is, however, still available. Unlike in previous games, Pay 'n' Sprays cannot be used in sight of police, even for vehicle repair; visibility to police is indicated by whether the wanted stars on the HUD are white (visible) or gray (out of sight). Pay 'n' Sprays instantly remove the player's Wanted level, and their use advances the in-game clock three hours.

The player can swap vehicles while he is wanted. This makes the cops less likely to find the player as the police dispatcher relies on the last known location of the player as well as the color, make, and model of the vehicle the player was last seen driving. Like the Pay 'n' Spray, swapping a vehicle can only be done if the player is out of the sight of the police. When possible, the player should obtain a replacement vehicle in a secluded area. At higher wanted levels, swapping vehicles is essential in order to keep police confused and to ensure that the player has a fresh getaway vehicle. The player must be careful not to stay in a particular area for too long or meet any police car head-on while the stars are gray, as the police will eventually recognize the player, causing the wanted radius to refocus to the player's current location.

Like previous games, if the player can access a safehouse, the player can then use the bed to access the save function, dropping any wanted level in the process. This will, as usual, advance time six hours if the player decides to save the game, and cannot be used to achieve the Walk Free achievement.

During gameplay, the player meets two characters who may help the player reduce a wanted level. Kiki Jenkins, a datable character who can be met on Love-meet.net, is a lawyer whose influence with the District Attorney may be used to reduce a wanted level up to three stars once her 'like' statistic reaches 70%. Following Blood Brothers, it is possible to have Francis McReary lower one's wanted level if the player chooses to spare him. Both of these characters' abilities are not available during some missions, with Francis' ability removed after the final storyline mission.

Police in GTA IV are better-equipped, smarter, more determined, and more lethal than in previous GTA games; they can even respond to crimes committed out of their sight, as civilians can call police on their cell phones to report crimes. Police use their available weapons intelligently -- an officer with a Pump Action Shotgun will move in closer to the player to compensate for the weapon's short range, while one with a Carbine Rifle will hang back to take advantage of distance. During a chase, police officers will coordinate themselves and will attempt to box the player in with several cars, drive faster, use the PIT maneuver and try harder as the player's wanted level increases. Also, police can commandeer civilian vehicles (parked or occupied) if their vehicles are destroyed, or if a police car is unavailable; they may even commandeer the cars parked in front of the player's safehouses.

Police radio messages are an additional audio indicator of a player having one or more police stars. These messages reflect the crimes being committed by the player; for example, firing a pistol will lead to mentions of "firearms discharge" over the radio, and hitting an individual with any gun is described as a "shooting".

When the player attains their first Wanted level, the game displays information to briefly explain the Wanted level system.

To lose your wanted level, escape the flashing zone.
The cops are less likely to identify you if you swap vehicles or run through alleyways and side streets.
If the wanted stars are grayed out then the cops have lost sight of you.

At a one-star Wanted Level, any LCPD police patrols will give chase and attempt to arrest the player on sight. Officers only shoot at one star if they feel threatened (for example, if the player aims a firearm in their direction or drives dangerously close to said officer), and most commonly attempt to arrest the player. Police cars follow the player. The search radius for one star is approximately two city blocks. The player is unable to buy any items (weapons, clothes, or food [except from vending machines]), enter a taxi as a passenger (except for Roman's Car Service), enter bars or clubs, or partake in activities like TV, darts, bowling, etc., while wanted by police.

A one-star Wanted Level is attained by committing the following crimes: 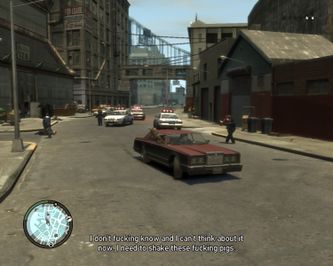 Officers now shoot to kill more often. Officers in cars now chase the player, rather than simply following behind, and often try to overtake the player or run them off-road.

At a three-star Wanted Level, police vehicles become more aggressive in their pursuit, attempting to pin the player's vehicle against buildings and run them off the road. NOOSE now begin to assist the LCPD in setting up roadblocks on main roads and bridges; they also send NOOSE Cruisers and NOOSE Patriots in pursuit of the player. NOOSE Patriots may attempt to ram the player from the front, putting the player and officer(s) inside at risk of a windshield ejection from their vehicle. Strong, fast vehicles are recommended; motorcycles are not suggested, due to the aggressive driving of the police. Officers on foot now use Pump Action Shotguns against the player.

A police helicopter is now called in, which can be heard on the radio as "Dispatch air unit from _______", The helicopter will shine a spotlight on the player at night and opening fire if officers on board get a clear shot. The helicopter, however, periodically breaks off from pursuit. The helicopter retreats if the player goes underground, stays inside a large structure for a long time, or kills both sharpshooters on board; however, oftentimes, the helicopter will remain until it runs out of fuel and crashes. In the Ballad of Gay Tony, sharpshooters are equipped with Advanced Machine Guns instead of Carbine Rifles. Police boats are dispatched if the player is in or near water. Like the Police Maverick, the Predator has a sharpshooter on board. The player is now unable to board the subway.

At four wanted stars, the FIB and NOOSE's Tactical Response Unit join the fray, and the player is confronted by NOOSE Enforcers and FIB Buffaloes in addition to the previously mentioned forces. Tactical Response Unit officers and FIB agents come four to a vehicle and are typically armed with Carbine Rifles, although some agents carry SMGs and Pump Action Shotguns, and wear body armor for protection. The search radius covers an area approximately the size of Bohan.

Note: In The Ballad of Gay Tony, all law enforcement officers start firing upon the player while in pursuit at this level, and NOOSE and FIB officers use Assault SMGs and Automatic Shotguns as well as the aforementioned weapons against the player. 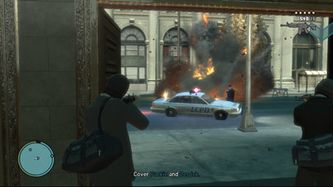 At five wanted stars, the Police Maverick is accompanied by a NOOSE Annihilator. In the main game and The Lost and Damned, all law enforcement officers fire upon the player while in pursuit (In The Ballad of Gay Tony they will do this at Four Stars), making getaways difficult — FIB or NOOSE are particularly perilous to engage, as their SMGs are likely to make short work of the player's getaway vehicle. Due the increased risk of being shot to death, use of a motorcycle as a getaway vehicle is especially not recommended. All officers employ more advanced driving techniques, such as the PIT maneuver, as they try to make the player spin out of control and crash. NOOSE/FIB cooperation is more apparent at this level, both forces spawning and pursuing the player in equal numbers. In certain areas, rooftop snipers with high-powered rifles appear on low to mid-rise rooftops and ledges.

At six wanted stars, the Police Maverick is replaced with a second Annihilator, making escape from the search radius extremely difficult. The search area is approximately the size of the Broker-Dukes island in Liberty City. More NOOSE Cruisers, Patriots, Enforcers and FIB Buffaloes pursue the player, with only a smattering of LCPD cruisers and patrol cars. The number of police patrols and police cruisers reduces so more FIB Buffaloes and NOOSE Enforcers can join the chase/shootout. Survival and escape is most difficult, and a very fast and/or durable vehicle is recommended. All law enforcement vehicles fire upon and ram the player relentlessly with very little regard for collateral damage. The player must not hang around too long in a busy area of the city, or else they will rapidly lose health due to the rooftop snipers. On foot, the player must act accordingly to avoid getting cut down by gunfire. Fleeing is the better option when pitted against several officers, and the player should only attack when officers impede the player's escape.

The player can earn two Achievements/Trophies associated with the Wanted Level, however the use of specific cheat codes blocks the rewards. GTA IV Tips can give help on obtaining these achievements/trophies.

Retrieved from ‘https://www.grandtheftwiki.com/index.php?title=Wanted_Level_in_GTA_IV_Era&oldid=413103’
Categories:
Cookies help us deliver our services. By using our services, you agree to our use of cookies.