Bar Brawl is a mission in Grand Theft Auto: Vice City which protagonist Tommy Vercetti does independently in the Vercetti Estate in Starfish Island, Vice City.

Lance Vance tells Tommy that the Front Page Café is refusing to pay for protection because it already has protection from DBP Security. Tommy is mad at Lance for not taking action fast so he goes to the bar to deal with this problem with two of his bodyguards. Tommy attacks and kills the guards in front of the bar and meets up with the owner to discuss protection but the owner tells Tommy that he doesn't care who he pays protection to as long as he gets protection. He then tells Tommy to "sort the matter out amongst yourselves". Tommy quickly proceeds to go to DBP Security Headquarters and attacks the DBP security guards who are trying to pack up and escape from Tommy's wrath. Two guards attempt to escape on PCJ-600s and flee to south of Ocean Beach. Tommy chases them as the guards' backups in Securicars try to attack Tommy. The escaped guards are quickly killed.

Lance Vance: Some bar is refusing to pay. They reckon they're protected by a local gang of thugs. But don't worry Tommy, I can handle it.

Tommy Vercetti: You call this handling it? You two, off your asses... Let's go.

Tommy Vercetti: Get in the car, useless.

(After killing the two guards and talking to the bar owner)

Bar Owner: Aw hell, not again! I don't need this crap! These idiots operate out of DBP Security around the block. You guys just sort it out amongst yourselves.

Lance Vance: It's you, my friend, I feel you're not giving me a fair slice. And more than that, you been embarrassing me in front of the boys. I can't have that .

Tommy Vercetti: Lance, it ain't like that. You've been making mistakes.

Tommy Vercetti: Lance, don't screw up, and we won't have any problems. I screw up, you can lay into me any time.

Lance Vance: Tommy, I've done everything for you, you treat me like a fool. Don't do that.

Tommy Vercetti: Lance, I won't rip you off or stab you in the back, okay? Just take it easy. This is tough enough without you getting all emotional on me. Trust me. Do you hear me, do you hear me?

Lance Vance: I hear you Tommy, but I can't take this much more.

Tommy Vercetti: Lance, don't be like this. Now I'm warning you. Do you hear me? Just relax, take a few days off. Okay ? I'll talk to you.

The reward for completing this mission is $4,000. The mission Cop Land is unlocked. The SPAS 12 is now also available to purchase at the Downtown Ammu-Nation.

The player will also get a $1,000 bonus for every Securicar that they destroy out of the ones that chase them. 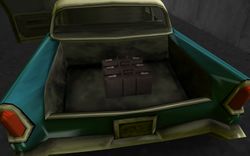 The back of the DBP Oceanic with the briefcases in the trunk.

Retrieved from ‘https://www.grandtheftwiki.com/index.php?title=Bar_Brawl&oldid=415096’
Category:
Cookies help us deliver our services. By using our services, you agree to our use of cookies.