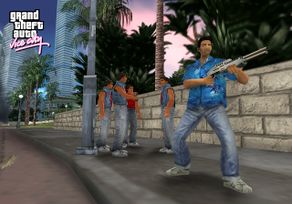 "Extremely powerful shotgun. Could stop an elephant. And has. Used in Vice City on other things. With devestating results."
-Vice City Bureau of Investigation file description.

The SPAS 12 also known as the Spaz 12, S.P.A.S. 12 and Combat Shotgun is an automatic shotgun that appear in the following games:

The weapon's gas-powered repeater system generally holds seven shells in the undertube of the gun. The gun shoots in a fully automatic mode in the GTA Vice City rendition, however this feature was removed in later installments, presumably to curb the gun's power. The shotgun is not commonly found throughout the games; in GTA Vice City, only one Ammu-Nation sells the gun, at the extreme price of $4000, with a similar situation in GTA San Andreas. In GTA Liberty City Stories, the gun can only be obtained through one spawn location.

Retrieved from ‘https://www.grandtheftwiki.com/index.php?title=SPAS_12&oldid=418363’
Categories:
Cookies help us deliver our services. By using our services, you agree to our use of cookies.