Boomshine Saigon is a mission in Grand Theft Auto: Vice City given to protagonist Tommy Vercetti by Phil Cassidy from his firearms business in Little Haiti, Vice City.

Tommy Vercetti goes to Phil's Place and finds a drunken Phil Cassidy, who shows him his boomshine bombs, with Vercetti saying that he feels 'woozy', as he's getting slightly drunk from the potent fumes. Phil presses the detonator as Tommy ducks down on reflex, but the bomb fails to explode. Realizing it must be the remote's batteries, Phil staggers over where he has fresh ones... sitting on the bench beside the bomb. Having just changed the batteries, Phil throws up his left hand with the detonator in celebration, with the bomb just off to his right. The motion (of course) causes him to accidently pull the trigger, and the explosion blows off Phil's right arm. Phil knows he's injured, but only falls to his knees and onto his face laughing; he's so drunk that he apparently can't feel any pain.

A now woozy Vercetti then gets Phil into his Patriot and drives him to the West Haven Community Healthcare Centre. Phil, however, states that the hospital is full of police and Viet Cong, and asks to be driven to an ex-army surgeon in Little Havana, as he owes Phil a favor.

(Tommy is hit by boomshine fumes which he tries to fan away.)

Tommy Vercetti: I swear you should lay off that boomshine, man - smells like paint stripper. Making my eyes burn...

(Phil guides Tommy, now staggering a bit himself from the fumes, to a large crate Phil is using for cover.)

Tommy Vercetti: Woof! God! Should I be able to smell that from way over here? I'm feeling woozy.

(Phil clicks on the detonator as Tommy ducks, but nothing happens, so he walks over to the bomb for batteries.)

(Having changed the batteries, he celebrates but accidently clicks the detonator. The bomb explodes and blows off Phil's right arm.)

(Phill falls to his knees and keels over, still laughing; he's so drunk that he can't feel the pain.)

Phil Cassidy: Watch out! Charlie in the tree line!

Phil Cassidy: Is it me or are the roads made of jelly?

(If the police see Tommy driving while drunk)

Phil Cassidy: Not the hospital, man! Too many cops and Viet Cong! There's an ex-army surgeon owes me a few favors and a lawnmower. He's got a place down Little Havana - ooo look, a giant fish.

(Tommy Vercetti drives towards the ex-army surgeon in Little Havana.)

(Tommy Vercetti drives towards the ex-army surgeon in Little Havana.) 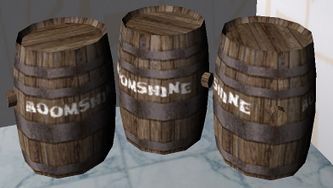 The three barrels of Boomshine that spawn in the corner of Tommy's Suite in the Ocean View Hotel.

The rewards for completing the mission are $4,000, the ability to purchase weapons from Phil's Place, and three barrels of boomshine in the Ocean View Hotel.