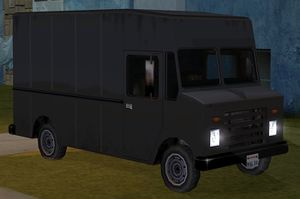 The Black Boxville used to start the sub-mission.

Burglar is side mission in Grand Theft Auto: San Andreas. The mission is available at the start of the game, although it is first introduced to the player during the mission Home Invasion.

The mission is activated whenever the player enters a black Boxville between the hours of 20:00 and 6:00 that is found in certain locations. The mission requires the player to go around looking in people's houses for anything worth stealing while wearing a ski mask that is obtained at the start of the mission automatically. Not all the houses can be stolen from in a certain area. Only those with the yellow arrow in front of the door. Once inside a house, the player must find an item and take it back to the van. The player must also be quiet, as making too much noise will wake the inhabitants up and they will call the police (you are given 10 seconds to leave before they do so). On some occasions, the inhabitants will already be awake upon entering the home, and sometimes it will be a whole house full of gang members. When it starts getting towards sunrise, the player must go and unload all the things picked up at a near by garage marked on the map.

The player will get different amounts of money depending on what the player has picked up (TV, stereo, games console etc.), where the player got them from, and the amount of items the player has picked up. This also depends on where the player is doing the mission; Los Santos will give you the least amount of money, as most of the city consists of poorer residential areas such as Ganton and Idlewood, but the houses in Vinewood offer much more valuables. Homes in San Fierro contain fairly valuable items, as it consists mostly of upscale neighborhoods. Las Venturas homes offer the most potential for money, although Prickle Pine is the best place to go. The burglary mission is not required for 100% completion, but getting a total of $10,000 (not necessarily needed in a row) can give the player infinite sprint.

The Black Boxville can be found parked in each of the 3 cities:

Upon entering a house, the noise meter appears. That is similar to other bar like meters in the game that go up and down. There are ways you can walk throughout the house that will not make the meter fill up completely. You can crouch and then slowly walk. Crouching reduces noise while being able to move quickly. Or you can walk standing up very slowly. You can obtain a Silenced 9mm and shoot the occupants of the house in the head while they sleep to eliminate the noise meter. You can also eliminate the noise meter by accidentally filling up the meter and alerting the occupants of your presence.

Find a house that you want to rob, park the black Boxville in front of it and wait for the time to hit 20:00 instead of starting after that time. This way, one can possibly have more time in robbing, but still has to watch out for the countdown timer.

Retrieved from ‘https://www.grandtheftwiki.com/index.php?title=Burglar&oldid=369203’
Category:
Cookies help us deliver our services. By using our services, you agree to our use of cookies.