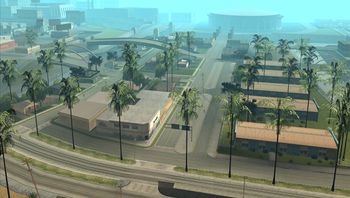 Ganton, Los Santos, as viewed to the east in GTA San Andreas.

Ganton is a deprived district in Grand Theft Auto: San Andreas located in the eastern part of Los Santos, San Andreas and based on real life Compton.

Ganton is a stronghold of the Grove Street Families, as Grove Street is located here, and is populated by many Grove Street Family gang members. These include Carl Johnson, Sweet and Ryder. Former residents at the beginning of GTA San Andreas include Beverly and Brian Johnson (both deceased) and Big Smoke (who moved to Idlewood).

In Grand Theft Auto V, Ganton is replaced with the incorporated City of Davis, however Grove Street still remains. By 2013 the Ballas are in control of the Davis area.

Ganton is depicted as a crack-ridden ghetto with small houses. In Grove Street, there is a large presence of Grove Street Families members, hookers and drug dealers. There are many low-class businesses and stores and cheap cars. The district seems to be void of landmarks, and the only real landmark is the sewer near the district which is supposed to symbolize the Los Angeles River.

Ganton is the main stronghold of the Grove Street Families, but begins to come under increasing pressure from Ballas gang members, hoping to take the area for the Ballas. This is facilitated by Big Smoke, Ryder and B Dup, who are secretly aligned with the Ballas. Drugs have become a problem in Ganton, mainly through Smoke and Ryder buying drugs off Mike Toreno, T-Bone Mendez and Jizzy B. (the Loco Syndicate).

Ganton eventually falls into the hands of the Ballas gang after Carl Johnson is taken to Whetstone by C.R.A.S.H. and Sweet is arrested and imprisoned. The Grove Street Families disband with no leader, although former gang members continue to wear the green. They more than likely continue to reside in Ganton, although they are not visible on the streets during Carl and Sweet's absence. The former Grove Street Family gang members, under the influence of Big Smoke, co-operate with the Ballas and Los Santos Vagos.

Carl and Sweet (released via Mike Toreno) later return to Ganton, which is in disarray due to the influx of drugs. They re-claim Ganton as Grove Street territory (re-establishing the gang), and use Ganton as a base for invading other districts (such as Idlewood). Ganton, along with the rest of Los Santos, is later plagued by riots following the acquittal of Frank Tenpenny, although Carl and Sweet manage to 'lock-down' Grove Street, and bring stability to Ganton as a whole. Ganton serves as the place of death for Tenpenny, who crashes a Fire Truck over a bridge and into Grove Street.

Ganton
Los Santos (3D Universe)
Grove Street Families
Ballas
Retrieved from ‘https://www.grandtheftwiki.com/index.php?title=Ganton&oldid=418130’
Category:
Cookies help us deliver our services. By using our services, you agree to our use of cookies.