Kiki Jenkins, born 1976, is a character in the HD Universe and a 32-year-old datable character in Grand Theft Auto IV. She is datable after the mission Out of the Closet (once Algonquin is unlocked) and can be contacted via Love-Meet.net under the alias LawChick. She lives on Feldspar St in Little Italy, Downtown Algonquin. She works at the Goldberg, Ligner and Shyster law offices as a lawyer. 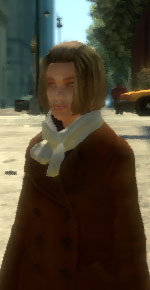 Kiki was born in a suburb "bored out of my mind" and moved to Liberty City. Her parents are noticeably wealthy, having paid for her apartment, law degree, car and clothes. She feels a certain guilt for this, both striving to make her own money and defend less fortunate people in court. Her parents are also still a major influence over her, making her promise not to date any more of her clients. She will also not date any fellow lawyers or law enforcement officials, as she sees them as corrupt, harsh and in the case of lawyers, greedy. She is very sympathetic and naive in nature, and many of these past dates have committed crimes again and eventually gone to prison. After this, she began online dating and if she meets Niko, quickly gets attached to him as a part of this pattern.

Kiki is much more down-to-earth than the other two internet girlfriends, stating she's looking for a long term relationship and often getting extremely clingy and jealous. She refuses to go to strip clubs and if Niko invites a prostitute in the car with Kiki, they will fight (though this is quite understandable). In more extreme cases, she insists that Niko is cheating on her, either questioning him in person, sending a private eye to eavesdrop on his other dates (if he has any) or intercepting Roman's text messages from strip clubs, writing "Is this what your whores send you?". Ironically, if you call Kiki too many times she will dump you.

Kiki likes cheap clothes from the Russian shop and likes mid-range to very cheap cars. Her Favorite Activity is Drinking at either Jerkov's or Club Liberty while her second favorite activity would be the Split Sides comedy club, The Perestroika cabaret club in Broker and activities like Bowling, Darts and Pool. For meals, Kiki enjoys fast food outlets such as Burger Shot and Cluckin' Bell, shunning more expensive establishments, like the Italian restaurant near her house and will end up not eating anything at all. She is available between 6 AM and 2 AM.

Once Niko's relationship level gets high enough, he will gain the ability to lose up to, and including, a 3 star wanted level by calling Kiki on her mobile phone. You also receive this reward by keeping Francis McReary alive in the mission, Blood Brothers, however, the reward can only be used up until the end of the main storyline missions. On the other hand Francis' reward is better because it removes the whole wanted level, but Kiki's reward doesn't.

Retrieved from ‘https://www.grandtheftwiki.com/index.php?title=Kiki_Jenkins&oldid=403523’
Categories:
Cookies help us deliver our services. By using our services, you agree to our use of cookies.