A screen shot of the Hot Coffee Mod 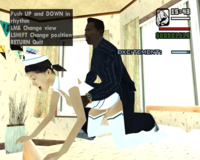 Hot Coffee Mod in use at girlfriend's house

This feature was disabled from the game before release, but not actually removed. This was discovered by several modders in 2004. Patrick W released a modification (the Hot Coffee mod) to enable it. This was made downloadable for the PC in June 2005 and was released for the PS2 and Xbox soon after.

The name "Hot Coffee" refers to the way the released game alludes to the unseen sex scenes. In the unmodified game, the player takes his girlfriend to her front door and she asks him if he would like to come in for "some coffee." He agrees, and the camera stays outside, swaying back and forth a bit, while moaning sounds are heard.

Jack Thompson and other anti-gaming advocates denounced the Hot Coffee mod in the media, as if it were an existing feature of the game that children could easily stumble across. This led to the game being pulled from stores across the USA, and re-rated as AO (Adults Only) by the ESRB (already an 18 in the UK). Rockstar was forced to permanently remove this feature and they soon released a non-modifiable 2nd edition of GTA San Andreas, which regained the M rating.

Wikipedia has an article on:
Hot Coffee minigame controversy

In the middle of July 2005, the ESRB, as well as various politicians including Senator Hillary Clinton (D-NY), launched an investigation into the Hot Coffee mod. Initially, Rockstar released a statement that strongly suggested that the Hot Coffee content was entirely created by "hackers". However, this claim was undermined when codes were released on web forums for the PlayStation 2 Gameshark and AR Max CheatDevices that demonstrated that the controversial content was, indeed, built into the console versions.

Confusing the issue is a recent version of the Hot Coffee mod which replaces the semi-nude girlfriends' textures with unclothed bitmaps that cannot be seen without the mod.

On July 20, 2005, Grand Theft Auto: San Andreas was re-rated as "AO" (Adults Only) by the ESRB. Rockstar has halted production of all versions of Grand Theft Auto: San Andreas and plans to release a censored version of the game, which is intended to conform to the initial "M" rating, later this year. Due to the new AO rating, many major retail outlets, including Sears, Hollywood Video, Best Buy, Wal-Mart, Blockbuster Video, Target and GameStop, have pulled the PC and console versions of the game from their shelves.

As of July 23, 2005, however, the PEGI rating for the game has remained unchanged, although it is likely that the PEGI sexual content label will be added to the game cover. The effect on Grand Theft Auto: San Andreas sales is as of yet unknown, but Take Two Interactive has revised its projected financial statement for the quarter to reflect a further anticipated loss.

On August 10, 2005, Rockstar Games officially released a patch for Grand Theft Auto: San Andreas. Nicknamed the "Cold Coffee Patch" by some, the patch fixed many performance issues and bugs. However, the most major addition was that the patch disabled the controversial "Hot Coffee" scenes, even if the "Hot Coffee" mod was reinstalled. 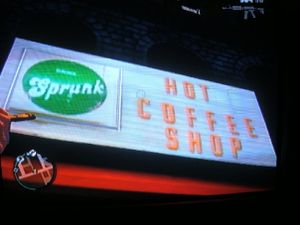 The game has since been re-released with the "Hot Coffee" scenes removed (Grand Theft Auto:San Andreas 2.0), allowing the game to return to its "M" rating. However, the "Hot Coffee" mod dashed financial expectations for TakeTwo Games, which lost $28.8 million in its fiscal 3rd quarter of 2005 (May to July) partly because of the re-rating; the company lost $14.4 million in the same quarter in 2004.

In December, 2007 Take Two Interactive has approved class action settlement with an exchange or the refund for original game copies. According to final report only 2,676 people have returned game, compare to over twelve-million sales.

In September 2009, Take Two finally settled the class-action lawsuit brought against them for US$20m, of which 15m will be paid by insurers and 5m by the company itself.[1]

In November 11, 2005, FOX program Killer Instinct's latest episode focuses on a hit online video-game with explicit violence that can cause players to murder people. Other parts of it shows us that teenagers are playing it and the worst thing is unlocking sexually explicit scenes and mini-games (aka Hot Coffee Scandal) caused the detectives to find the creator of the game, get information and stop the murderer who's been playing the game for hours (ala-Devin Moore). The fictional game title was Murder One: San Fransisco and the box art looks similar to San Andreas and Vice City but with badly drawn art. Also, the fake game is actually pre-rendered with models from Poser. It is also combined with another upcoming controversial game, 25 to Life, a cops and robbers simulator.

Rockstar has since vowed legal action against any subsequent sources that reveal how to access this part of the game, mainly CheatDevice code sites.

Retrieved from ‘https://www.grandtheftwiki.com/index.php?title=Hot_Coffee_Modification&oldid=374360’
Categories:
Cookies help us deliver our services. By using our services, you agree to our use of cookies.