Jane Hopper is the principal leader of the union. She is corrupt and only wants to bribe the mayor and politicians to increase wages substantially.

There are also three other unknown union leaders, who were featured in the mission Frighteners. 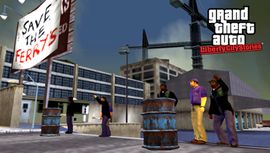 The strikers are workers or workers on strike. Under orders of Jane Hopper, they are protesting and blocking at the entrances of the following:

If the player go's past the picket lines at any of these places, the strikers attack the player with Baseball Bats and Molotov Cocktails.