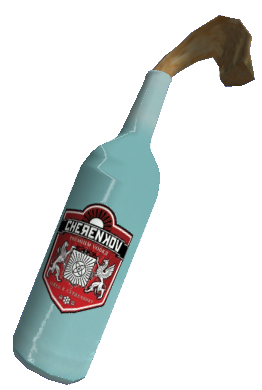 The Molotov Cocktail in GTA IV.

Carl Johnson about to throw a molotov in GTA San Andreas.

The Molotov Cocktail is an incendiary weapon first introduced in Grand Theft Auto 2.

Used to set a small area on fire, the Molotov cocktail is based on the real-life "home-made" Molotov cocktail, which is prepared by inserting a rag into a partially filled liquor bottle, allowing the rag to "wick up" the flammable alcohol or other volatile liquid within. This causes the soaked rag to become flammable itself, allowing it to be lit on fire. Because the fumes from the flammable liquid (which are actually what catches fire, not the liquid itself) are contained within the bottle, full ignition does not occur until the glass container is ruptured, allowing the fumes to escape. This normally happens upon impact of the Molotov against a hard surface, after being thrown.

It can set a group of pedestrians on fire or light a car's engine on fire, causing it to explode. Victims on foot will catch fire and die if close enough to the flames. In GTA2 molotov doesn't set fire, but explodes. Use of the Molotov will normally result in at least a 1-star wanted level. It proves to be one of the most deadly weapons for the player when used at close range. It is one of only two weapons which can destroy a tank, the other being a Flamethrower. In Grand Theft Auto: Vice City Stories the Molotov is more effective and can destroy a vehicle rapidly fast after one cocktail being thrown at the vehicle (providing the vehicle is in the inner circle of the blast).

In Grand Theft Auto: Chinatown Wars, the player can use the touch screen to throw Molotov Cocktails at a distance in any direction. Huang Lee can go to gas stations marked in the radar to fill up bottles of gasoline to use as Molotov Cocktails. A minigame is associated to this with the player using the touch screen to aim the gas nozzle to the bottle and shoving a cloth into the bottle.

When you have it held in you in GTA San Andreas in front of the mirror, the fire does not show up.

Molotov Cocktails can be purchased at the back-alley gun shops for $500. They can also be purchased from Little Jacob for $350. Being hit by one on multiplayer is not a death sentence, because you can pause and will not take fire damage while the flames begin to extinguish. However, you can still be killed, stabbed, shot, or otherwise hurt. They can be used from cars, but it is diffucult to do so as the Molotov would have to hit the target directly. A couple Molotovs will flame up a car also, while four will set it ablaze, and six will completely destroy it or render it inoperable.

Retrieved from ‘https://www.grandtheftwiki.com/index.php?title=Molotov_Cocktail&oldid=398698’
Categories:
Cookies help us deliver our services. By using our services, you agree to our use of cookies.