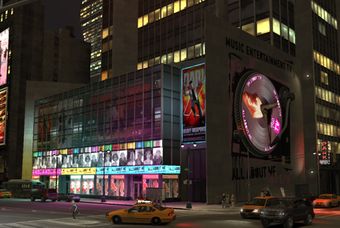 The base of the Star Junction MeTV building in GTA IV, being evidently based on MTV's Times Square studios.

The network is a parody of the TV network MTV, while the logo and name bear some similarities to YouTube, a video sharing website.

Little is known of the GTA Vice City Stories rendition of MeTV, except that a news branch of the network, known as MeTV News is primarily featured on the official website of GTA Vice City Stories as a faux news channel reporting on events, features, and characters in the games. MeTV News is hosted by Jenny Mitchell, with Phil Herrick as a reporter.

In Grand Theft Auto IV, MeTV's prominence is elevated slightly, with MeTV's Liberty City office visible at Star Junction, Algonquin and referred to as the MeTV Building. The player can also download the MeTV theme for their phone from Vipluxuryringtones.com; and on Integrity 2.0, Lazlow talks about a show "on MeTV where washed-up comedians make snarky comments", based on VH1's I Love The '80s.

In The Ballad of Gay Tony, the Blue Brothers, teen pop performers, make an appearance at the MeTV Building, and it also contains offices for the Liberty City Rampage ice hockey team, serving as the setting for the mission Dropping In..., where Luis kills team owner Marki Ashvilli for Ray Bulgarin.

A real life TV network called MeTV (Memorable Entertainment Television) exists in the United States; however, it is an over-the-air broadcast network that specializes in classic TV programming and carried on digital subchannels in most markets.

Retrieved from ‘https://www.grandtheftwiki.com/index.php?title=MeTV&oldid=417824’
Categories:
Cookies help us deliver our services. By using our services, you agree to our use of cookies.