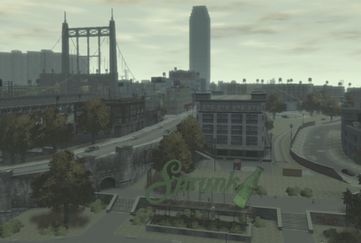 East Island City is a main neighborhood in north-central Dukes, Liberty City. It is bordered to the north by Walton Lane, Harrison Street, and the East Borough Bridge and to the northwest by Yorktown Avenue (Steinway); Franklin Street to the west (the Humboldt River); Hooper Street and Livingston Street to the south (Cerveza Heights); and San Jacinto Avenue to the east (Meadows Park). Dukes Boulevard is its primary street.

East Island City is a primarily industrial zone with pockets of urban areas. The western part of the neighborhood is dominated by the Dukes portion of the East Borough Bridge, which terminates in EIC, and features a number of warehouses. The Humboldt River promenade, linking Dukes Park north of BOABO, Broker, and Steinway Park in Steinway, Dukes, runs through EIC tunnel underneath in this area. Brownstones are present in the eastern portion, which is also the location of most the neighborhood's attractions and commercial businesses. The center of the neighborhood is home to even more buildings, as well as repair shops and small grocery stores. It is a strong Spanish Lords community.

The neighborhood is home to the National Union of Contemporary Arts (NUCA) at P. 45, near the intersection of Hancock Street, The East Borough Bridge, and the LC24 Tower, across the street from NUCA. There's a Bank of Liberty branch on Dukes Boulevard and Harrison Street. In western East Island City, along Dukes Drive by the Humboldt, is Dukes Park with a nice skyline view of Algonquin. Both areas are in the northeast extension of the neighborhood. A large abandoned warehouse covered in graffiti has several characters of the GTA franchise painted on it,[1] which is likely based on 5pointz. A police precinct can be found at the intersection of Livingston Street and Bunker Hill Avenue. There is also Silverback Studios, a parody of Silvercup Studios.

Long Island City used to be a separate city before it became part of the New York City metropolitan area. So it could be inferred that East Island City was historically separate.

The Liberty City Subway has a station; the Dukes Boulevard Station at the intersection of Dukes Boulevard and Morris Street (at the border with Steinway); however, it is under construction, so it is not in service. The closest in-service LTA station is Huntington Street, in Cerveza Heights.

Retrieved from ‘https://www.grandtheftwiki.com/index.php?title=East_Island_City&oldid=376874’
Category:
Cookies help us deliver our services. By using our services, you agree to our use of cookies.