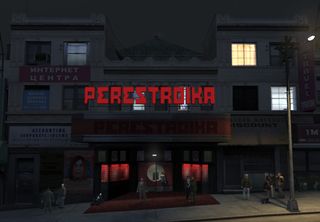 The exterior of Perestroika in GTA IV.

Perestroika is a Russian owned cabaret club in the Hove Beach district of Broker, Liberty City in Grand Theft Auto IV, once owned by the late Mikhail Faustin. The comedy acts there are much poorer in humor than those of Split Sides, though there are some interesting acts. Like the Split Sides, Niko can watch shows in club on his own, on a date or as an activity with a friend.

"Perestroika" means "restructuring" in Russian. Perestroika is also a term commonly used internationally when referring to political and economic reforms in the Soviet Union during the 1980s that resulted in its collapse.

The club's interior includes various rooms that serve several purposes in-game. The main feature of the club is its dining area, bar and open space (presumably used as a dance floor) fronted by a stage, where the club's acts are performed. The backstage of the club is accessible from a door to the left of the stage, connecting to the perfomer's dressing room, a QUB3D video arcade game, and a backlot of the club which leads up to the club's roof. A cloakroom is also included between the main entrance and the main room of the club. Niko can freely explore these back rooms.

Perestroika's shows are triggered from within the club itself; the player must first enter the club and locate the marked checkpoint to the right, where the player is intended to be seated. 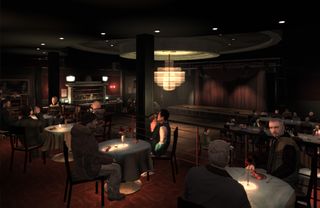 The interior of Perestroika.

At night, the club is guarded by two gangsters who search guests before they enter (except the player). At night there will usually be a long line-up of people waiting to get into the club, but Niko can always bypass the line-up (which never actually gets shorter).

If, however, accompanied by a friend or girlfriend (whilst the player is doing an activity), the guard will let them in, despite the mission completion of The Master And The Molotov. If you take Roman there after the mission Crime & Punishment, he may occasionally feel uncomfortable and says it must be where Faustin hangs out when he isn't holding hostages in his basement and shooting them. After completing The Master and the Molotov, he tells Niko it's a shame Faustin is dead because the place is going to pot.

After Faustin's death, it's assumed that Kenny Petrovic took over the club, because it continues to be frequented and guarded by the Russian Mafia when all known leaders are dead.

Perestroika hosts a total of four different acts, of which two will be feature each time a player comes to watch its show. The sequence of acts are repeated after six visits.

Retrieved from ‘https://www.grandtheftwiki.com/index.php?title=Perestroika&oldid=402694’
Categories:
Cookies help us deliver our services. By using our services, you agree to our use of cookies.