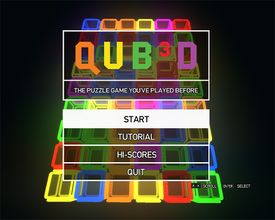 The menu of QUB3D.

QUB3D (pronounced "cubed") is an arcade minigame in the HD Universe appearing in Grand Theft Auto IV, The Lost and Damned, The Ballad of Gay Tony and Grand Theft Auto V, however it is non-interactive in the latter.

The main goal of the game is to match up colored blocks into groups of four or more before they fill up the box, similar to Puyo Puyo, except the blocks actually "tumble" down when positioned vertically, akin to a Slinky; as the player acquires a specific amount of points, the game moves up a level.

Initially, the game begins with only blue, green and red blocks. As the player progresses up the levels, however, the game slightly increases the falling speed of new blocks, as well as including more block colors:

To counter the increasing difficulty of the game, the player is given the option of acquiring special abilities by stacking 4 blocks of the same color to form the shape of a square-shaped grouping (2 blocks by 2 blocks); note such groups will not remove any neighboring blocks of the same color. By stacking four such groups, the "Power" bar will be filled, granting the player the ability to choose one of four "Special" tricks that aid gameplay. Each "Special" is marked by a different color and is triggered by a specific command:

A minor drawback to this feature is that the player can only hold a maximum of 3 choices of special abilities at a time.

Beating the developer's high score of 10,950 points earns the "King of QUB3D" achivement. The player must complete this for completion.

Retrieved from ‘https://www.grandtheftwiki.com/index.php?title=QUB3D&oldid=413587’
Categories:
Cookies help us deliver our services. By using our services, you agree to our use of cookies.