The logo of Split Sides in GTA IV. 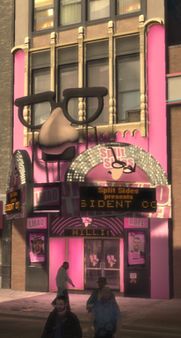 The Frankfort Avenue entrance to the Split Sides.

The Split Sides Comedy Club is a comedy club accessible in Grand Theft Auto IV and The Lost and Damned but inaccessible in The Ballad of Gay Tony.

Located at Frankfort Avenue and Jade Street in the Star Junction district of Algonquin, Liberty City, the Split Sides is intended to be one of only two places (the other being Perestroika) where the player can watch shows; inside, real life comedians (such as Kat Williams or Ricky Gervais) perform comedy routines in front of live audiences. Their routines often make reference to Liberty City itself mentioning locations by name or commenting on in game elements (such as the lack of dogs in the streets).

The player can visit the club by himself, with a friend, or on a date with one of his girlfriends to see performances. Two routines from Split Sides can also been seen on television while in one of the player's safehouses.

The Split Side is a parody of Comic Strip Live.

In GTA IV, the Split Sides originally hosts only two hosts, Ricky Gervais and Katt Williams, whom routines are repeated after a certain amount of repeated visits. The Lost and Damned exclusively includes an additional guest, Frankie Boyle.

Retrieved from ‘https://www.grandtheftwiki.com/index.php?title=Split_Sides&oldid=402791’
Categories:
Cookies help us deliver our services. By using our services, you agree to our use of cookies.