Pre-release screenshot of the shooting range. 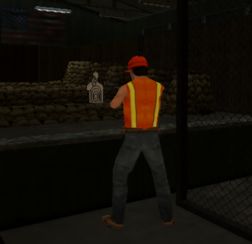 A shooter at the Shooting range in Grand Theft Auto: Vice City Stories.

The shooting range has five rounds. Once the rounds are complete, Vic will get a discount for all weapons in the shops. The rounds have to be completed in a single try; if the player fails or quits, they will have to start from the beginning. The guns used for each round are 9mm pistol, Micro SMG, Shotgun, M16 and the Dragunov laser sighted sniper rifle. The shooting range is opened and available for use at any time after the mission "Cleaning House".

Retrieved from ‘https://www.grandtheftwiki.com/index.php?title=Phil%27s_Shooting_Range&oldid=323496’
Categories:
Cookies help us deliver our services. By using our services, you agree to our use of cookies.