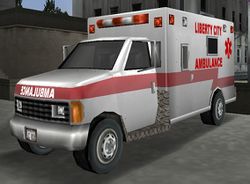 The Paramedic side missions can be activated while in an ambulance.

Side Missions (also known as sub-missions or odd jobs), are optional non-storyline missions available in many games throughout the Grand Theft Auto series. These missions are usually not part of the storyline and can be started at any time while not on another mission. Many side missions involve performing errands or jobs in particular vehicles, whilst others are races and sports.

Side missions can be started in many ways: by pressing the side mission button in certain vehicles, entering specific parked vehicles, or standing on a mission marker. Most side missions are required for 100% completion of their respective games.

Some examples of side missions:

This page lists all side missions, and the vehicle they involve (if relevant).

In GTA 1, certain main missions are triggered via entry of certain vehicles parks throughout the city, which presumably contains an occupant who offers a job for the player. In order to actually start the mission, the player is required to remain in the vehicle for a short period of time; players who wish not to proceed can simply exit the vehicle, canceling the job.

A variant of vehicle missions are side missions triggered by simply entering a specific vehicle in a specific location, such as a Love Wagon in San Andreas, which triggers a Kill Frenzy where the player attempts to destroy a number of vehicles within an allocated time.

The feature has largely been downgraded in GTA 2 to usage of a Tank in a Kill Frenzy, as well as the Wang Cars side quest to locate and enter all marked cars.

To trigger a vehicle mission in the GTA III Era, the player must use the corresponding controls while inside the appropriate vehicle. The missions give the player a time limit to complete the set of objectives in that level, which is calculated with respect to distance. Cash is rewarded for completion within time. If the player runs out of time, or leaves the vehicle for too long, the mission fails and the player must start from level 1 (for certain GTAs).

Each level gets progressively harder, but the remaining time on the previous levels stacks up to make the harder levels easier. Once the top level is completed (usually level 12), a relevant reward is given to the player. For example in Grand Theft Auto: San Andreas, completing the Firefighter missions grants the 'Fireproof' ability, which makes the player immune to flames.

Like in GTA 1, side missions triggered by simply entering a specific vehicle in a specific location are present in the games. Examples include Casino Calamity and Multistorey Mayhem in GTA III, RC Raider Pickup and Checkpoint Charlie in GTA Vice City, or the BMX Challenge and NRG-500 Challenge in GTA San Andreas.

The Vigilante side missions can be activated while in a police car.

The Taxi Driver side missions can be activated while in a taxi.

Entering a firetruck can start the "Firefighter" missions.

By GTA IV, vehicle missions have been eliminated in all but the police cars and Roman's Taxi. However, in GTA Chinatown Wars, vehicle missions return in full, with some changes and some new additions (such as takeaway delivery.)

Retrieved from ‘https://www.grandtheftwiki.com/index.php?title=Side_Missions&oldid=392721’
Categories:
Cookies help us deliver our services. By using our services, you agree to our use of cookies.