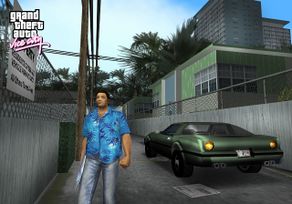 For the weapon with the same name from GTA San Andreas and GTA IV, see Micro Uzi.

In GTA Liberty City Stories and Vice City Stories, the gun is called Micro SMG in-game, in GTA: Vice City, Uzi 9mm on the original PlayStation 2 version and Uz-I on all other versions. Every rendition of the Micro SMG holds 30 rounds per magazine.

In Grand Theft Auto: San Andreas and Grand Theft Auto IV, the Micro SMG is actually a civilian-legal pistol version of the IWI Micro-Uzi sub-machine gun but called Micro SMG in-game. It can be identified as the pistol version because the side-folding wire stock is deleted, and there is no provision on the rear of the receiver to mount one. One can only assume that the pistol was illegally modified for full-automatic operation. The Micro-SMG has a respectable rate of fire, about 950 RPM, however it is slower than its real-life counterpart, which has an astounding cyclic rate of 1,250 rounds per minute. In Vice City, the Vercetti Gang carry Micro SMGs after the main storyline's final mission Keep Your Friends Close... is completed. The Micro SMG is also the starting weapon for the players after the regular pistol when advancing from the first points of the games. The version in Chinatown Wars appears to be an Ingram MAC-11 by the HUD Image.

In The Ballad of Gay Tony episodic title for Grand Theft Auto IV, the Gold SMG is essentially a gold plated Micro SMG owned by Yusuf Amir, and an improved version of the Micro Uzi.

The full sized Micro SMG (alternatively called Uzi) was originally intended to be featured in Grand Theft Auto: San Andreas. Beta screenshots of the game show the Grove Street Families gang members perform a drive-by with the beta appearance of Big Smoke, Sweet and possibly Ryder or Big Bear. The gun was left out for unknown reasons although the animation for it from GTA Vice City was used for the MP5, when fired. The final version of the game features a Micro Uzi named Micro SMG in-game.

Retrieved from ‘https://www.grandtheftwiki.com/index.php?title=Micro-SMG&oldid=411172’
Categories:
Cookies help us deliver our services. By using our services, you agree to our use of cookies.