The Enforcer is an emergency police vehicle featured in the following games:

It is called out once the player has reached a four-star wanted level (three in GTA Chinatown Wars), containing SWAT (or, in the case of GTA IV, NOOSE) officers. It has seating for up to four people, including the driver. The Enforcer is also notable from granting the player body armor upon the first time entering the vehicle. GTA IV's version differs by only giving about one-third of the player's total armor, similar to the health boost from an Ambulance. It can also be used for the Vigilante side mission in the GTA III Era games, even if not being the best possible choice for the mission.

The vehicle's overall performance is average-to-good. While large and heavy, the Enforcer's powerful engine allows it to accelerate well and reach high top speeds, while its corner can be properly negotiated via the use of the handbrake. Its low clearance, small wheels and heavy weight, however, make it unsuited on rough terrain where it may roll easily.

As with all emergency/police vehicles, the Enforcer is equipped with sirens and lights which will cause other traffic to move out of the way when active. Although supposedly heavily armored, the truck is not bulletproof, although it is relatively resilient.

In GTA IV, the Enforcer shares a chassis with the Securicar and Police Stockade (based on an armored 1989-2001 International 4000 Series, but the front turning signals have been omitted). It bears NOOSE livery, and "Liberty City Tactical Response Unit" markings. It comes with a matte black finish and, like all other emergency vehicles, cannot be washed at a car wash. It is labeled as being manufactured by Brute as an 8000cc "Turbochar" and also bears "8000 Stockade" badging.

The vehicle is heavily armored (with "Impregnable Armor" (Featuring "Don't Even Think About it" as a company slogan) brand badges present to the lower back of the vehicle's cab), rendering it almost completely bulletproof; while most vehicles can be destroyed by a shotgun shell to the fuel tank, this does not apply to the Enforcer. The vehicle is still vulnerable to explosion damage, and, while a steel mesh grating over the windshield protects the driver and front passenger from frontal assault, the cabin's side windows are not armored. It does not have a police computer, unlike most NOOSE or police vehicles.

The GTA Chinatown Wars rendition of the NOOSE Enforcer leans towards a van-based design similar to a Boxville, sharing the same body design with the Alphamail. 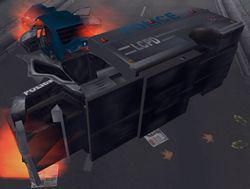 A wreck of a Enforcer during GTA III's introductory mission.

Retrieved from ‘https://www.grandtheftwiki.com/index.php?title=Enforcer&oldid=412101’
Categories:
Cookies help us deliver our services. By using our services, you agree to our use of cookies.